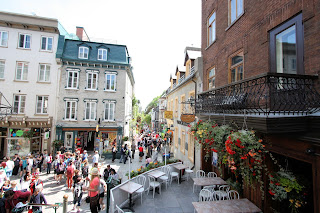 View of the Petit Champlain district in Québec City

Oh my gosh, it's a new post! Yeah, sorry it's taken me a while, I have become a very occasional blogger as I'm sure you have noticed. Life has been very busy for me since I moved into my new place. Getting my boxes emptied and my place set up was the easiest part, then came the long, drawn out delivery process for my washer and dryer (I spent the first three weeks I was in my new place having to go to Sweetheart's place to do my laundry) and the alarm system and phone woes (it took me three tries to get a cable guy who actually knew how to connect phone by cable system so that my alarm system would work) and getting my heating system checked out to see if it is worthy of the coming Fall and Winter (turns out my furnace is an energy eating dinosaur, so they're coming to replace it next week) and yanking all the weeds out of my sorrowfully neglected front garden (previous owners had landscaping done, but then did nothing to maintain it). Add to all of that the fact that I'm working three evening shifts and two day shifts for the Summer, spending adequate time with Sweetheart and my friends, trying to jog more than once a week and the fact that I have started singing lessons and learning Polish (for the benefit of communicating with Sweetheart's family, they make the effort to try and speak French around me as much as possible, so I figured I could try and speak a bit of Polish as well) and blogging takes a bit of a back seat. I do think about making time to blog a lot, but actually making the time is a bit harder. I'm working on it folks, I swear I am!

Now on another note, I finally have some photos of my visit to Québec City for you! They were all taken in Old Québec, except for the last few which were taken in Ste-Anne-de-Beaupré, but I'll get to that in a minute. First, a bit of history! Québec City is one of the oldest European settlements in North America, it was founded my Samuel De Champlain on July 3rd, 1608, however the first fort built on the site by Jacques Cartier dates all the way back to 1535. He spent one Winter there before heading back to France. He planned to come back and settle the site more permanently, but eventually abandoned the settlement permanently due to ongoing hostilities with the First Peoples in the area and also the harsh conditions in the are in the Winter. You have to be made of stern stuff to deal with Canadian Winters now, so imagine what it was like three hundred odd years ago...Québec City remained under French control until 1763 when the English took over. Despite being the capital of New France and now the Province of Quebec, Québec city in 1763 still had only 8000 inhabitants. That just goes to show you how much interest the French took in colonizing North America. We were good for hunting beavers for their fur hats. That was pretty much it. After the English took over, the population in Québec City and the rest of Canada steadily grew, especially after the War of Independence in the United States when a lot of Loyalists and their families moved North to Canada so they could remain loyal to the British. Québec City is still relatively small however with a population of 516 622 in the immediate city and 765 706 when you include its suburbs. Compare that to the population of Montreal which is 1.65 million in the city and close to 4 million when you include its suburbs and you get an idea of the difference between the two. I had only been to Québec City once in my mid teens before my visit there with Sweetheart in May and I was struck by how much smaller it was than I remembered. It is a lovely place though and full of history. Also, fear not, if you wish to visit Québec City and speak no French, most people who work in shops, restaurants and tourist attractions are bilingual and if you happen to fall on someone who is not, they will be able to find someone who does speak English to help you :) 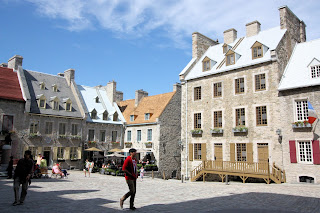 Square across from Notre-Dame-des-Victoires church in Old Québec 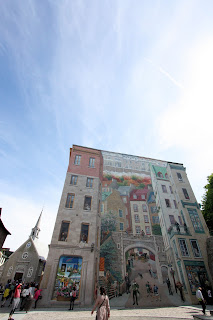 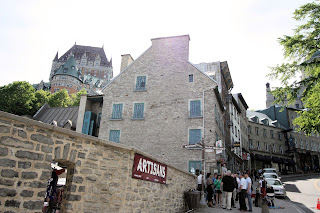 The other place Sweetheart and I went to visit while in Québec City was Ste-Anne-de-Beaupré Shrine in the town of Ste-Anne-de-Beaupré, which is about a half-hour drive from Québec City, if even that. It is a shrine dedicated to the mother of the Virgin Mary, Ste. Anne, and is one of three major sites of Catholic Pilgrimage in the province of Québec. Many people have visited the Shrine over hundreds of years and have left miraculously cured from all sorts of ailments. The shrine is absolutely beautiful, inside and out as you can see is well worth a visit whether you are Catholic or not. 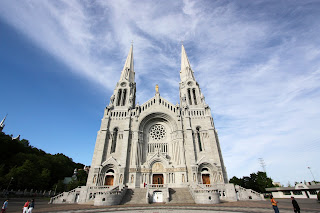 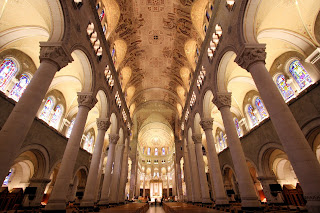 There you have it! I hope you enjoyed this post and I really hope I can make it back here soon with another. I have not forgotten my promise to show you pictures of my new home, just give me a chance to sort through my father's 247 CDs...I alphabetized them all and they are now sitting in neat stacks on my living room floor waiting to be listened to so I can decide which ones I'm going to keep. I made it through the As the other day. Once the floor is clear (I'm aiming to get the sorting done before my housewarming on August 24th), I'll be good for pictures :)