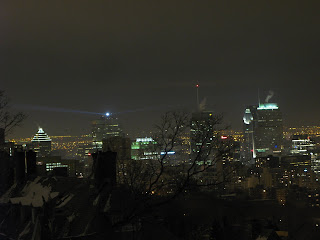 So here I am, back home in Montreal and in honor of that, I figured that I would post picture of the Montreal skyline , in winter no less, to contrast my nice warm, southern themed Skywatch post from last week. I hope you all like this one just as much as you did my previous post, I really enjoyed all your lovely comments :o) Don't forget to go and see all the other amazing skywatchers' picture here: http://skyley.blogspot.com/ and as always, have a great weekend!
Posted by Karine at 21:27 7 comments: 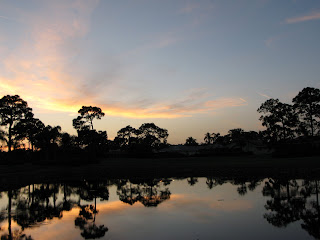 In the spirit of my Southern Vacation, here's a picture I took at sunset on the golf course my grandparents live on in Florida. Their entire community is built around two 18-hole golf courses with, as you can see, a lot of lakes a and trees which make for very nice pictures :o)

If you like this Skywatch picture, be sure to check out all the others you can find here: http://skyley.blogspot.com/

So, last night while it was pouring cats and dogs down here I took the time to give my blog a face lift. What do you guys think of it? I wanted something more original, colorful and fun and I would say this suits, wouldn't you? I also wanted to make sure that it framed my pictures nicely. Let me know what you think :o) If you would like a similar template for your blog, you can go here:
http://delightfuldots.blogspot.com/

Aside from that, here's another waterfowl that can be found down here in Florida, and I do know what this one is, it's an egret! Isn't he lovely? 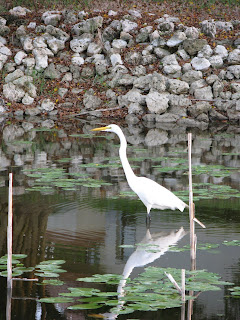 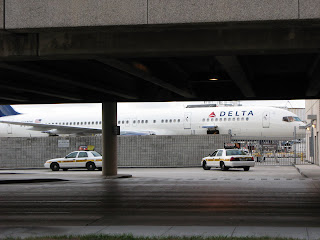 So, here I am, finally on vacation! I hadn't been on a real vacation in a bit over a year, so I was really looking forward to this trip down to my grandparents' place in Florida. I flew from Montreal to Fort Lauderdale with a stop in Atlanta on Friday (with Delta as you can see, that's my plane parked at its gate in Fort Lauderdale still having luggage unloaded while I was about to get in the car to leave lol ) and I was quite impressed when I saw the airport in Atlanta by how large it was. I got a real kick out of having to take a subway to get from one terminal to another, we could so use one of those in Montreal so we wouldn't have to walk two kilometers (I'm not even sure that's very much of an exaggeration) to get to some of the gates in the international terminal. Anyhow, I had two very smooth flights on my way down here and have really been enjoying the heat and sunshine, although right now the regular summer afternoon thunderstorms are rolling through, we were actually chased off the beach by them earlier because they usually don't show up until about 4:00 or 5:00 P.M. and today they popped up at about 2:00! Oh well, they only cut our beach time by about a half hour and I am enjoying sitting out here and listening to the thunder and the rain falling, the joys of having a partly covered patio!

Here are a few shots I took on an outing yesterday afternoon, and if anyone can identify that wonky waterfowl, you deserve a medal :oJ I'll probably have a chance to post again before leaving for Toronto of Friday morning. I get to visit my sweetheart for three whole days without having to share him with family and friends, what a treat!!! When you do the long distance thing, you tend to get a bit jealous when you have to share you significant other with other people :oJ 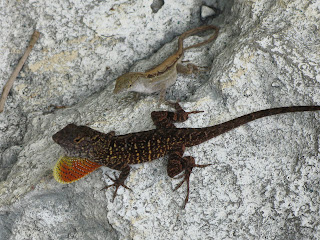 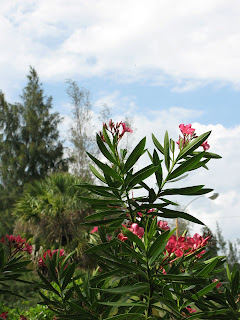 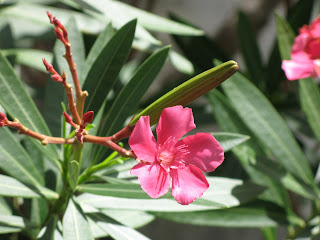 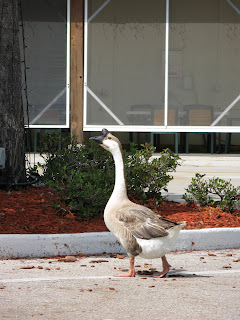 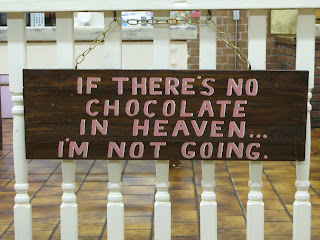 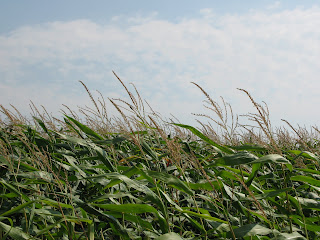 Hey, I actually managed to fit this post in among the packing and 'Have a nice trip!' phone calls! I took this shot on a road trip to the Eastern Townships area of Quebec, about 45 minutes East of Montreal in the town of St-Grégoire-d'Iberville. It was actually the first time I got really close to a cornfield so I had a blast shooting the stalks in the wind against the sky. For those of you who have never been right next to one let me tell you corn plants are VERY tall! I'm 5 feet 3 inches tall and they were a good two or three feet taller than me!

I hope you enjoyed my Skywatch post and you can head over to the Skywatch site here: http://skyley.blogspot.com/ to see more great shots. Have a great weekend!
Posted by Karine at 22:27 4 comments:

Writer's block and lack of time...

Ugh...I started trying to get a good post out twice this week but failed due to a lack of time and writer's block. I haven't suffered from writer's block since high school and had forgotten how much it sucks...I'm hoping it's just because I'm so busy this week since I'm leaving on vacation tomorrow and that it will clear up once I'm settled in down South and will be nice and relaxed. I will, however be putting my Skywatch post up tonight or tomorrow morning before leaving if it is all humanly possible, otherwise it'll go up late tomorrow night once I'm settled in :o)
Posted by Karine at 07:50 No comments: 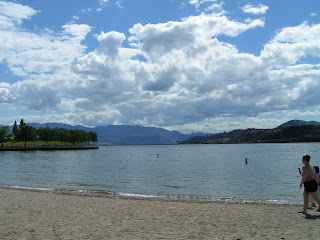 This picture of cloud formations over Lake Okanagan was taken in Kelowna, British Colombia. If you're ever looking for a good place to get good cloud shots, I'd say that British Colombia and Florida are the best places, I had a blast shooting the clouds there, as you'll be able to see in many of my Skywatcher posts :o)

Now go check out my fellow Skytwatchers at http://skyley.blogspot.com/
Posted by Karine at 07:28 5 comments:

How about not panicking?

Soooooooo, I guess you've all heard about this little thing called 'swine flu', also known as Flu strain A (H1N1)? If you haven't, you obviously boycott the news, which I admit I have also started doing in recent months because in my opinion they cause a great deal of fear and panic where none is necessary. I became even further disgruntled with the media over their treatment of this whole Swine Flu thing. I'm not denying that things are bad in Mexico, a lot of people got sick down there and a lot of people died, but what I find is that the whole situation was not put into perspective. All the media did was recite numbers. 'So many thousands of people are sick and so many hundred have died'. My first reaction was 'YIKES, that's a whole heck of a lot of people!' But then I started thinking...how many millions of people live in Mexico City? And they're awful packed in there, there's a lot of pollution and a lot of poverty and people who can't get access to good medical services. Hmm...well, naturally a lot of people would get sick and a higher ratio of them would die. But of course, the media didn't state that. They just kept going on and on about how many more people were getting sick, how many more people had died and then: OH MY GOD, IT'S SPREADING!!! And this is a strain of flu that we've never had before, so we have no natural defenses against it!!!

So okay...you know how you sometimes catch the flu? When you catch the flu it's because it's a strain you've never had before. Every time you catch the flu, that's why. The only way you can form antibodies against the flu, other than getting the flu vaccine, is to catch it. And odds are, if you catch the flu, you won't die from it, even if the media says hundreds of people already have. There are thousands of deaths from the flu all over the world every year, people catch the flu every year, I caught it two years ago and was sick as Hell over Christmas, I missed mass, had a fever for five days straight, then was so wiped out I had to stay in bed for two more, but guess what? I'm still alive, perfectly healthy and when that same strain of flu went through my office this past year I didn't get it. Yet, the lady who works two cubicles down from me and had gotten the flu vaccine did. Why? Because the vaccine was against the flu strain the government had projected would be most widespread this year and the one going through my office was of the supposedly less widespread strain. So, go out and get the swine flu vaccine as soon as it comes out if you like, but you know, you just might get the flu anyhow...just not swine flu. As for me, I'm not panicking. If I catch the flu, I catch the flu. I won't go running after it, I won't purposely breathe in anyone's sneezes or coughs or not wash my hands after going to the washroom or refrain from using hand sanitizer after having to stand on the bus or subway and holding a post that a couple of hundred people have already touched before me, but I will not, as I found out many, many people have been doing, stock up on masks and hand sanitizer like the Plague is coming. Because no matter how much people try to say they're not panicking, I normally don't have to ask a pharmacy employee if they have Purel left only to be told that there was a run on that and masks and that my one hope is their generic brand of hand sanitizer in the travel format section. Folks, I'm pretty sure that generic hand sanitizer is just as effective as Purel. If you don't believe that, you'd better steer clear of me because that's all I've been using after riding the bus for the past week without a mask.

The bottom line is that yes, this is a new strain of flu that no one had ever had when it first appeared. This does mean that more people will catch it than usual, so that also means that there will be more deaths from it than usual since these two things would logically go hand. But folks, it's still just the flu. It's not SARS or the Plague, it's not a death sentence it's just the flu, so be logical about it :o)
Posted by Karine at 22:13 2 comments:

Quinn up close and personal

A very rare occurrence took place earlier this afternoon. My cat Quinn actually stayed put for me when I caught her in a lovely pose, and for more than one shot too! So here are some pictures of my lovely lady looking worthy of a kitty cat beauty pageant :o) 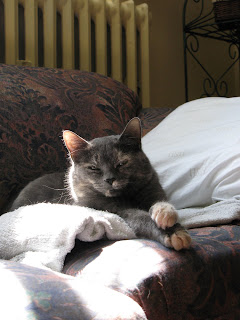 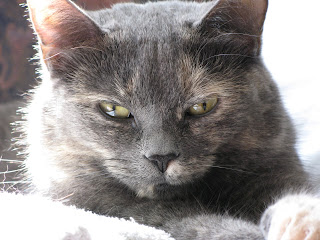 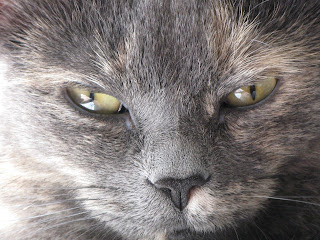 I hope you're all enjoying your weekend :o)
Posted by Karine at 15:39 No comments: 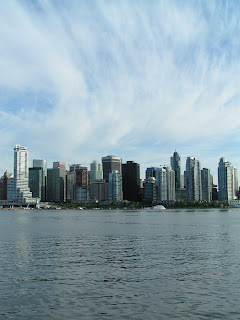 I took this shot of Downtown Vancouver, British Colombia, on one of the very few nice days we had while on vacation there in 2007, because I was so taken with the beautiful wispy clouds. Too bad they were bringing in the weather system that made it rain for the rest of our vacation...except the very last day we were there :oJ

Don't forget to go and check out other Skywatch photos here: