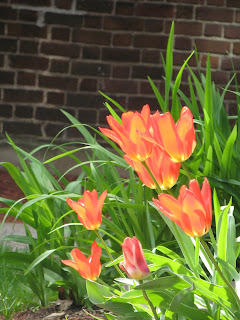 Tulips growing near my place a few years ago

First of all, I want to wish all of my Christian readers a very happy Easter :) I hope you get to enjoy this wonderful Holiday weekend with your loved ones. I will be going to a family dinner tonight and am going to be going to the cemetery to bring my father some flowers beforehand.

I'm sorry once again that I have not bee around much lately. Work has been crazy and life outside of work has been as well. I have been going to meetings at the bank with my brother to get our father's affairs in order, I have bought myself a car and have been getting ready for my upcoming surgery. In among all that I've been trying to find time to exercise and see my friends and keep my apartment tidy and talk with my Sweetheart. The last part has resolved itself since my Sweetheart finally came home very, very, very early on Thursday morning. We spent time together Thursday and Friday and I have now handed him off to his family for the weekend. Hopefully they'll return him to me willingly enough tonight or tomorrow.

Anyhow, I've been doing okay with keeping up with everything, but sometimes everything catches up with me and then I have to put of the breaks and cut back on stuff like outings with my friends and, unfortunately, exercising. My abdominal and core muscle exercises are easy enough to keep up with since I can do them at home, but since it has still been too cold for me to run outside (for anyone who sings, you know that cold air messes with your voice when you run in it and then there would go my ability to sing properly during choir practice and concerts) and time to make it to the running track has been sorrowfully lacking I've been slacking off on my jogging much to my sorrow :( I won't be able to run for four to six weeks after my surgery    and I've only been able to make it to the indoor track on average once a week for the past month or so. I doubt I'll be able to do much better this coming week since I have two choir practices and a concert. Hopefully next week I'll be able to make it out twice before my operation, because after that I will have to substitute the running for lots and lots of walking for a little while.

As for my surgery, it is coming up fast. I'm having some fibroids (benign tumors of the uterus that a large portion of women have, many of them without even knowing about it) removed as they have been causing me a lot of grief, such as very heavy periods, pressure on the nerves on the lower left had side of my back and perhaps most annoying of all, the largest one is squishing my bladder on one side. As I've said many times in the past few weeks, in my next life I want to be a guy. It looks so much easier. So basically what my doctor is going to be doing is performing something similar to a c-section, except that he will be removing all of my fibroids. You very, very rarely end up with just one fibroid. I have several, but the one causing me the most trouble is a very large (grapefruit sized) one that is the lining on the left hand side of my uterus. The other ones are more normal sized, thank heavens. I don't want to know how I would be feeling if they weren't, but the doctor is going to take them all out just in case some of the other ones decide to grow like crazy once the big one is out of the way. If you are wondering why I got these, don't worry, I am too. Fibroids can be genetic (as mine may be since a few women in my family had them, but none as badly as I do or as young) , but in my case I'm pretty sure they're due to my hypersensitivity to synthetic hormones. I never, ever had a problem with my hormones before I took the pill, but after I did...boy oh boy. I didn't even make it through my three month test pack before I ended up in the emergency room with issues and after that I had more. Anyhow, hopefully I'll be one of the majority of women who have their fibroids removed and never have another problem. I'm feeling pretty confident that the operation will go well and that I will bounce back from the operation pretty quickly, but I will admit that I am going to be requesting Valium upon my arrival in the hospital since hospitals do not bring very good memories and feelings for me right now. I didn't deal with being in one for my pre-op the other day and I'll be in for about three after my operation. I'll be bringing chamomile in both tea and tincture formats.

So that's my news for now, I'll try and pop in again before my surgery, otherwise I'll give you guys an update once it's all done! I'll be off work for at least a month, so I'll be able to come around a few times I hope. I may even give you guys a before and after shot of my waistline. I am not overweight by any means and what little fat I did have around my midsection I have worked off with my pre-surgery strengthening exercises, but there is, as you can probably imagine, some visible swelling due to the size of the largest fibroid, or at least to me there is!
Posted by Karine at 15:37 1 comment:

One of my cousins posted this on Facebook and I had to share it. I am the chicken. I wish I was the tiger so I could kick some butt, but right now I am definitely the chicken. I have to laugh about it, otherwise I would cry.
Posted by Karine at 23:24 1 comment:

I'm popping in to give you some sign of life! I'm still struggling with everything that's going on in my life. I had a very rocky week last week and suffered from an emotional crash and burn after my birthday once my Sweetheart was gone. I went from an emotional high to a major low and was just getting over it when there was a major family crisis this week. Definitely not cool. I'm therefore taking it as easy as I can this week and am hoping for an easier time this coming week.

My Sweetheart may or may not be coming home during the night Thursday into Friday, it remains to be seen. I was supposed to find out yesterday, but when I called him he was at a service station somewhere and I was not able to call him back. I'll find out today, but at this point, one week more without him will not make a huge difference since he's already been gone so long. His visit to Montreal for my birthday went by so quickly it felt like a blink. we saw each other every day while he was here, which was amazing, but since he's gone back we've had a hard time communicating because I'm back at work full time and it is a very busy time for me right now and also the cell phone and Internet signals over in my Sweetheart's neck of the woods have not been as strong. He's also been moving around in Haiti a lot more going to other work sites and to the beach for one night. Basically, he's been all over the map because the aid organization he works for when he is not working on the school now knows that he is there so they have been taking him to visit their work sites.

Anyhow, if he and I are lucky, he'll be able to come home this week, otherwise I'll be on my own for a bit longer. At this point, all I can say is 'meh', which is my reaction to a lot of stuff right now. I had to spend an hour and twelve minutes on the phone to cancel my father's cell phone service and get my phone off of his corporate account and onto my own? Meh, it had to get done. I'm having surgery in a month which will require a lengthy recovery? Meh, it has to get done. I may have to tough it out on my own for another week without my Sweetheart? Meh, he'll come home eventually. I'm feeling very blase about everything? Meh, I assume I'll return to my cheerful self eventually. Sooner rather than later I hope, because feeling 'meh', is not very fun. I know this will take time though, I'm not kidding myself about that anymore and I also know that I may never feel quite the same again. I will always have an empty spot inside me. I will always miss my father and I will always feel cheated that he passed away so soon. You don't miss someone who passes away right away you know. It creeps up on you the longer they're gone. It doesn't hit you right away that they're gone forever, but when it does the pain is terrible. You want a hug from them, but you can't have it. You want to pick up the phone and call them, but you can't. You want to have a conversation with them, but you can't. It is very hard.

I'll try and pop by again soon and let you know how I'm doing and if my Sweetheart has come home or not, but in the mean time I will continue trying to keep up with your blogs when I can. Thanks for sticking with me, even though my posts are not as chipper as they used to be. Once my surgery is out of the way, I'll be able to plan some vacation time with my Sweetheart (we've been talking about Paris!) so that will give me something more fun to focus on and tell you guys about!
Posted by Karine at 13:44 3 comments: