...am popping in while waiting for a late tour group to let you all know how things have been going.

I had a nice, albeit slightly more stressful than I would have liked (note to self: next time your aunt and cousin ask you if you would like to go to the store with them and your cousin's 15 month old baby, offer to stay home with the baby instead). It did me some good to get away though, but what I really need as this point is a nice, weeklong vacation. Two weeks would be better. I may get two weeks if I can hold out until Christmas before taking my last remaining week off, because then I get my five days of vacation, plus the four holiday days and then I would throw another day on the end because no way in heck am I going back to work on a Friday!

I also enjoyed being met at the train station by my Sweetheart when I got home last Monday. He took me back to his place for the night and we enjoyed a nice, leisurely morning on Tuesday until he had to start working like crazy again to get everything he needed to get done here at home finished before leaving for Angola that evening. He's been gone for a week now and will be back in three more. Time has been going by quickly since I've had so many appointments and things since then.

As for my blogging, I do try, but it is not easy. I'm very tired and have been trying to fit some exercise and time with friends in whenver I can to get my mind of things and thus help me to sleep better. I'm getting better at it and do not want to lose the swing of things. I'll keep working on creating a new balance in my life and hopefully blogging more regularly will fit in eventually, especially once I've gotten some more rest into my system.

Thanks for sticking with me, you're all amazing :o)
Posted by Karine at 10:27 2 comments: 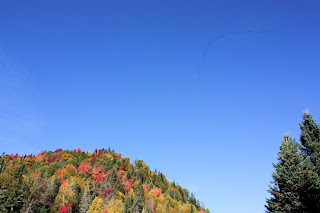 Fall colors and a flock of Canada Geese heading South to get away from the cold (click to enlarge and you will see them better, they are to the right above the spruce trees)

Thank you all for stopping by! To see more Skywatch photos from around the world, you can visit the Skywatch Friday blog. 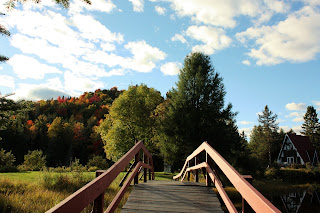 ...felt like blogging, so I'm popping in with a bit of an update for all of you :o)

I'm happy to report that my father has been doing better for the past two weeks. He is not out of the woods yet, but we are cautiously optimistic that he may get himself out of them eventually. I'm keeping up with the prayers and hoping for the best, but we certainly all enjoyed seeing him for Thanksgiving dinner. He joked a bit and ate well and was happy to be with us and that was what we were all most thankful for :o)

As for me, I've been feeling better for about a week now as well after a few good cries, a night at a spa up north that my Sweetheart gifted me with, finding myself a psychologist thanks to a employee support program and a few nice outings with some friends. Some TLC from my Sweetheart has helped as well.

Speaking of my Sweetheart, he's supposed to be off to Angola tomorrow, but when he opened his e-mail this morning, he found a plane ticket for a flight that left last night that was sent to him this morning!!! That has to be one of the greatest strokes of genius we have ever seen...NOT!!! We had a huge laugh over it and I sent it off to my family. We now have no clue when Sweetheart is leaving, but he was going to pack his bags tonight just in case he got another plane ticket for a flight tomorrow. And the plane ticket for this morning? Business class on a KLM flight. Then entire flight was work nearly 5500$. Throw Sweetheart's business partner E's ticket in there too and that's 11 000$ of plane tickets. Someone at the engineering firm he is getting this contract from had a really, REALLY bad day, methinks. Anyhow, my Sweetheart and I are now hoping that he will not be leaving until next week, which would buy us another evening or two together. Unfortunately I would miss out on an entire weekend with him since I am leaving for Toronto on Friday and will not be back until Monday, but what can you do? My weekend should be fun and I can still call my Sweetheart from Toronto, which I will not be able to do once he'll be in Angola. Ugh, an entire month without him. Here's hoping my father will stay well while he's away.

So there's my little update. I hope you've all been well also and that my Canadian readers had a nice Thanksgiving. This may be my only post for a little while again since I have a pretty busy week, but I'll try and drop in again soon, depending on how things are going :o)
Posted by Karine at 18:55 5 comments: