This is such a perfect little piece of wisdom and such a lovely picture that I'm thinking of printing it and keeping one at the office and one on my fridge at home. I've also e-mailed a copy to my Sweetheart, because let's face it, all of us in relationships end up getting miffed at our significant others every once in a while. If this has never happened in your relationship, than either you or your significant other should be up for Sainthood!!!
Posted by Karine at 21:53 3 comments:

Email ThisBlogThis!Share to TwitterShare to FacebookShare to Pinterest
Labels: relationship, words of wisdom

Merry Christmas to you and yours :-) 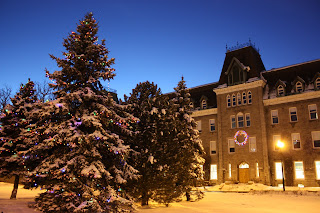 I know, I know, I dropped off the radar screen for a bit, but Christmas is definitely not a quiet time for me. It is very long and very tiring. That's what you get for working in a church, take the build-up to Christmas, multiply it by 10 and there you have what happens to me every year. That's why I always get all my Christmas shopping done by November. If I don't, it won't get done.

Anyhow, I did want to drop in and wish you all a very Merry Christmas.

I'll be off to work for the last time for two weeks in a bit, tonight is going to be a very busy night for us, we are going to handling five masses in the span of six hours, each one lasting about an hour and half and three of them will be attended by close to two thousand people. That's a lot of crowd control, but at least I'll be working upstairs in the Basilica and will be treated to hearing our boys' choir sing mass twice in a row. They sing beautiful traditional Christmas songs (no Jingle Bell Rock or Frosty the Snowman this evening, thank Heavens!), including the Minuit Chrétien (Oh Holy Night). I've included a video of boys' choir performing this French Canadian favorite in 2009 below.

On that note, Merry Christmas once again and I truly hope that you enjoy this moment with your family and friends :-)

One of my favorite Christmas traditions if the broadcast of the Ceremony of Nine Lessons and Carols from King's College, Cambridge in the U.K. Here are the carols from the 2010 edition.
Posted by Karine at 14:34 2 comments:

This, my friends, is hilarious :)

First off, the above YouTube video is of a performance of a song that was sung at the annual CBC Christmas Sing-In that was held at the Church of St.Andrew and St.Paul here in Montreal this afternoon. It was my second time going to the Sing-In with my friend G. We tried to go last year as well, but didn't make it in as the church was packed to capacity a half hour before the sing-in even began. The Sing-In is always lots of fun and I love how their repertoire is a mix of traditional pieces and more contemporary ones like this piece. It is well worth a listen if you have the time! The idea behind the Sing-In by the way  is to raise funds for a non-profit organization by inviting people to a performance of the St.Andrew and St. Paul's church choir (who are fabulous!) and giving the audience a chance to participate by singing along with the more well known songs. If ever you are in Montreal early in December, you should see if you can make it, but be sure to arrive at least an hour to an hour and a half before the beginning of the event to line up or you may not make it into the church!

On another note, I had a very busy week at work last week with lots of tours and phone calls and this week is looking like it is going to be the same as well. Except for the part where we're getting our first big snow storm of the year tomorrow and I will therefore be getting out of the tour I was supposed to be giving in the morning, thank Heavens! I normally enjoy giving tours, but I've really had my fill of them for now especially since most of them have been for teens who look like they would rather chew grass than visit a church. Teens are not an easy crowd. The only way to get through a tour with them (anyplace at all, because I've also given tours in museums and they would rather chew grass than visit those as well) is to act like you don't care that they don't care, otherwise they get the best of you and you're toast. They'll walk all over you and the teacher will complain to your superior, but if your superior knows anything about giving tours to teens, he'll show sympathy and let you off the hook. Act like you don't care that they don't care though and they'll typically grant you the favor of at least keeping quiet and not texting during the tour and the teacher will think you're great and come up and tell you so. So there you go, I was supposed to give a tour to some high school kids tomorrow and am now quite glad to know that I will not have to. Tours three days out of five instead of four makes a big difference.

Not too much new aside from that. I went out to a Christmas market that was being held at the Palais des Congrès in Old Montreal yesterday and got birthday and Christmas gifts for my Sweetheart. He is turning 30 on Wednesday (I'm next in two months, yikes!) and I think he's a bit leery of it. I'm sure he'll like his gift though. We didn't get to spend much time together last week because he had a lot of work to do, but we went to the 30th birthday party of a friend of mine from high school (we're all getting there at once, so that helps!) on Friday and he stayed over at my place and then last night after my shopping I went to his place for dinner. I'm hoping to spend more time with him this week than I did last week!

So that's it for this week, but to finish off here is one of a series of photos I took while I was out last night. It is  of the trees decorated for Christmas on McGill College Avenue with one of Montreal's landmark skyscrapers, Place Ville-Marie, in the background with it's strobe lights shining in the low clouds. 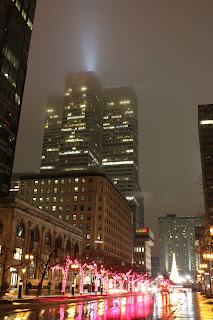 I hope you all have a lovely week :)

These always, always put a smile on my face!

First off, above is a very educational video about Montrealers' habits in the Winter. It's snowing tons? Meh, no big deal. Go out anyhow, no point in letting it change our habits, otherwise we're going nowhere until April! And in this respect, I am speaking of true Montrealers, those who live near enough the Downtown core that they do not need to take the highway to get home, let alone a bridge. Anyone who needs the highway or the bridge to get home and hears that large amounts of snow will be falling either stays home or heads for home no later than 2:00 P.M., otherwise they are prepared to sit in traffic for at least two hours to get home. When I lived in the suburbs it once took me three hours to get home, at which point my Sweetheart and his roommate at the time rescued me and took me in for the remainder of that week. On another note, this video  is also a nice look at how pretty our Christmas decorations are!

So, it's December! We had our first snowfall that stuck this week, although it was only about four centimeters worth of the stuff. No traffic pandemonium ensued and it has now all melted because it got very warm (7 degrees Celsius, which is very warm for us hardy Montrealers at this time of year) overnight and rained. I would prefer -5 degrees and snow personally. No colder than -5 mind you, it got down to -12 some nights this week and that was a bit much since we skipped the whole -5 thing and when straight down to -12. Anyhow, I'm hoping for more snow soon, since I find that bare trees and Christmas decorations look much better with snow than without.

As for how my week went, it was very up and down. I was in a very sour mood on both Tuesday and Wednesday, partly because of PMS and partly because of boredom at work. I'm normally quite a cheerful person, so when I'm in a sour mood, I feel awful about it and also everyone can tell. Not fun at all. I've been feeling better since Thursday though, which coincidentally (or not so much) was when I was going to my Sweetheart's place. He made me dinner for the second time in a week, which was lovely and we chatted and worked on his kitchen cabinet doors. We got together again last night for a fun raising concert for my colleague C's former high school in Haiti, then we went out with a few of my Sweetheart's friends for a drink before heading back to my Sweetheart's place. We only got home around 12:30 A.M. which is quite a late night for us! This morning we overslept and then ended up having to rush out the door since my Sweetheart was heading out to his brother's place on the South Shore and the buses that go out there only run every half-hour on the weekend. As for me, I came home and am planning on putting up the rest of my Christmas decorations today. I got started on them yesterday when I bought a Christmas wreath for my apartment door and today the tree is going to go up as is the advent calendar.

Finally, I realize that I didn't let you all know how my concert went last week! It went quite well once we were passed the first three songs. I think the major issue was that my director put all the hard pieces towards the beginning of the concert, so we didn't really have a chance to work up our confidence in front of the audience and get over our nervousness before hitting the hard stuff. I told the director so and hopefully he'll take that into account for our next concert. Also, my father didn't come, so my Grandma G couldn't make it in either, but I did have my brother and my Sweetheart there and also my dear old friend G who brought a friend with her and C came as well. It's always more fun singing when you have people you know in the audience. I particularly enjoyed seeing my Sweetheart with his eyes on me for the whole of the second half of the concert :)

Well, off I go to put up my Christmas decorations! But before I go, for any of you worried about the whole 'Mayan Doomsday Prophecy' for December 21st, here is a link to a page NASA put up to calm people down. I wish I could direct some of the people who have been calling into the Oratory worked up about this whole 2012 thing to this page, but it would probably do no good since most of them are zealots trying to tell me that I need to practice fear of God more and make penance for my sins because the end is most certainly nigh. Yeah, right...in my mind, December 21st is my aunt A and my Grandpa G's birthday and three days before I finally get off work for two weeks. I fully intend to wake up in one piece of the 22nd, hopefully with my Sweetheart next to me :) What do all of you think about the December 21st thing?