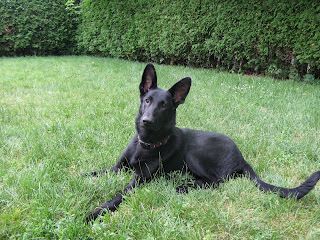 I'm an animal lover in general, although between cats and dogs, I've always preferred cats. My mom, however, is a total dog person. A German Shepherd person if you would like to be more precise. She has had three German Shepherds at all times for about six years now, and the one you see here is her latest addition, Griffin. She got him last February after our last real family dog (as opposed to just being her dog) passed away at the age of twelve, which is an extraordinary age for a German Shepherd to reach. I was reticent towards her getting another dog so soon since Griffin entered the picture only three weeks after Musk passed away, but I fell in love with Griffin right from the start. He's a very sweet natured dog and loves all people and animals...including cats. He's actually gotten a whack on the nose from a cat he was insisting on wanting to play with when she didn't want to and he still wanted to say hi to her the next time he saw her. The above picture was taken of him this past June when he was six months old. At that time he was already taller than my mom's full grown three year-old male True. Griffin is now nine months old and is taller than her very tall six year-old female Rhea. Yup, he's gonna be huge, but he's also very elegant. I'll introduce you guys to True and Rhea in future Camera Critters posts and I will also take some more photos of Griffin.

So that's my Camera Critters post for this week, I hope you all have a fun filled weekend with your critters and don't forget to go and check out everyone else's critters here
Posted by Karine at 10:46