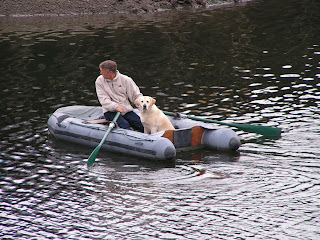 Here's a fun 'weekendish' shot that I thought you guys would enjoy. I took it, once again, while on vacation in BC in 2007. My boyfriend and I had gone to try and catch some dragon boat races while in Vancouver, but we ended up being a day late and there were only a few practice boats out. We had fun taking pictures instead and I was able to catch this beautiful yellow lab out for a row with his owner. Don't you just love his big, soulful eyes? Animals may not be able to communicate verbally, but I often find that they can say more in one glance than many people can say in an entire conversation.

Have a great weekend and keep an eye out for new pictures next week. It's my boyfriend's graduation tomorrow and I have a few other things lined up as well, so you buys may get some nice treats :o)
Posted by Karine at 22:20