So, as I mentioned when I put up my Skywatch post on Thursday, I had a pretty insane week. Not because I was overloaded with work or anything like that, but because my shower was out of commission until Thursday night.

Everything started on Saturday when one of the contractors who redid my landlord's apartment on the first floor (I live in the semi-basement of a duplex) came over the demolish my old, leaky shower and install a new PVC shower. It was supposed to be a one day job, but when he started demolishing the shower, we discovered that the people who had built it, God knows when, hadn't put a waterproof lining between the shower and the walls. The whole thing was rotten, the tiles were peeling off like post-its off a pad, the plywood behind them was rotten and even worse, the plywood underneath the cement base of the shower was totally rotten as was the hardwood floor under that!!! Yes, my shower was a new breed of disgusting, so much so that the contractor only had time to do the demolishing on Saturday. At the end of the day we Tilexed the heck out my shower with mold killing Tilex and then he took one of my fans, plugged it in, sat it the hole where my shower had been and screwed a piece of cardboard in front of the shower space almost to the top of it to keep my cats out and then left the fan running so that the area would dry out, since that needed to happen before he could install the new shower. He left, saying he would come back on Monday to finish the job. So, on Saturday I called my grandmother to ask her if I could go shower at her place which is about a 25 minute walk from my place and on Sunday we had Fathers' Day dinner at my aunt and uncle's place, so I used their shower.

Monday rolled around and when I got home from work, the contractor was still here, working on replacing the drainage pipe for the shower. In order to do that, he had to make room for the new pipe and also connect it to the existing plumbing. He found a rather unpleasant surprise while doing this though, a pipe connected to my heating that had corroded and had been leaking for who knows how long...he had to stop working, call the landlord down to show him the problem and then see if a plumber could come in to fix the problem. No one was available that night, so he had to board up the hole in my floor where my shower base would eventually go and I had to call in to my choir and tell them that I wouldn't be able to make practice that night because I had to find some place to go and have my shower since my shower was still out of commission. I ended up reaching my father who came to get me to bring me to my grandparents' place and then he left me the keys to their apartment so I could keep going there until the problem was fixed. They had left on vacation for the week that same morning, so it was really the easiest thing to do and it made me feel at least marginally better that I wouldn't be inconveniencing anyone by dropping in every night to use their shower facilities.

So that gets us to Tuesday, day four of what was supposed to be a one day job. The landlord rang my doorbell at 8:20 A.M., just before I got changed to go to work. There I was, still standing in my boxers and tank top and kimono in front of my landlord and two plumbers. Great...Just the landlord I wouldn't have minded, he and his wife and I have all seen one another in our jammies before because we used to share the downstairs laundry room, but the plumbers were a bit much, especially since one of them looked to be about 65 years old. The Landlord looked kind of sheepish and apologized all over himself saying: 'I guess I should have called first'...Yup, that might have been an idea. Oh well, nothing to be done about that, I let them in and they looked things over and they basically came up with two options. Either the plumbers would be able to fix or replace my old cast iron heating pipe that had corroded through, or they would have to tear out all my radiators and then the landlord would have electric heating isntalled which would entail holes being drilled all over my ceiling to put the wiring for the heating through. I was not a happy camper about that possibility, nor was I too thrilled at the thought that even just to replace the pipe they might have to tear up a good sized area of my hardwood flooring. I left for work in a rather lamentable mood and remained in that state until I got a call from the landlord in the afternoon telling me that they'd been able to fix the pipe, hooray! The damage wasn't too bad either, they only had to punch a hole in the ceiling outside my front door and take up a small area of my floor just in front of my shower. The contractor had also had the time to put the base of my shower in, things were looking up!

Everything was looking good for the work to be finished on Wednesday, so I left for work without my shower kit thinking that I would finally be able to shower at home that night, but then I got a call from the landlord during the afternoon informing me that they'd had a very hard time getting the shower into my apartment. When it didn't fit through my front door, they'd tried getting it in through my front window and the side door that connects my apartment the stairwell of my landlord's place before finally having no choice but to take apart my front door to get it through. They had to take off the whole door frame on the left-hand side of my door and then rebuild it using a shelf from the garage and because of all this and because it was a Holiday here on Wednesday and they couldn't replace supplies they ran out of, they had to stop working short of finishing my shower. On top of all that my apartment was left a complete dust-covered mess because they'd had to saw the door frame off. I had to clean all of that up before walking to my grandparents' place and back again and finally getting home at 9:45 P.M. Happy I was not...

SO this brings us to Thursday, day six of the one day job. I wasn't going in to work that day because I had an 11:15 A.M. appointment out in the West-Island area of Montreal, but the contractor was coming in that day to supposedly finish my shower. I'd been treating the whole thing with an 'I'll believe it when I see it' attitude since Tuesday. So out I went and when I got home all tired and sticky from my long hot day of wandering around the Island on various appointments and riding in non-air conditioned buses, the contractor was still here. 'Oh God' I remember thinking, 'Please don't tell me I'm going to have to go back out in this heat (31 degrees Celsius with a humidex of 37) to shower at my grandparents' place!'. But no, I did not. The shower was in place, the plumbing was connected, but it wasn't siliconed and, darn it, the door didn't fit right and wouldn't close completely, but it was ready to be used. Thank God!!!

So the contractor was supposed to come back yesterday to fix the door and do the silicone, but he got held up at another job and wasn't able to make it. He therefore asked my landlord to come and put a shower curtain in for me to keep water from landing on the floor of my bedroom (which is where my shower is). So, this is what my shower looks like: 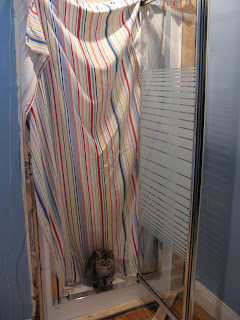 Yes, that's Magique sitting in front of the curtain. She loves hiding in there, especially since the curtain was put in this morning, and she actually slept in the shower for part of the night last night. I don't normally let her do that because I don't want cat hair getting in the drain, but since the door doesn't close...anyhow, at least it makes for a cute picture.

So there you have it! All should be done on Monday, but again, I'll believe it when I see it. One thing's for sure, I am never taking my shower for granted ever again...
Posted by Karine at 13:39