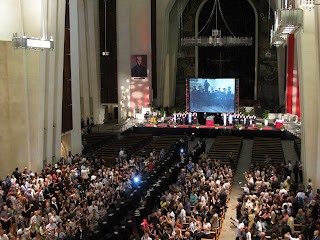 So, as I mentioned in my previous post, my boyfriend was in town this past weekend for his graduation ceremony and let me tell you, it was one of the most memorable weekends I have ever had. Words cannot express how happy we were to be able to celebrate the end of his studies together. It was a very long road for him (four years undergrad plus two of graduate school) and he worked incredibly hard, so I am, of course, immensely proud of him :o) The ceremony was held at the Basilica of St-Joseph's Oratory which was also very symbolic for us, because my boyfriend was a chorister in the boys' choir there for their full eight year program and it's also where we met. I trained him as a tour guide when he started working at the Oratory in the summer of 2004, decided pretty much from the get-go that he was the man for me and haven't left him alone since then ;o) Anyhow, tickets for the graduation ceremony were 35$ a piece, so we decided to forgo that formality since I could get a better seat for free up in the organ loft since I'm good friends with the organist at the Oratory. If you've never been to the Oratory and seen the pipe organ in the Basilica, here are a few shots of it: 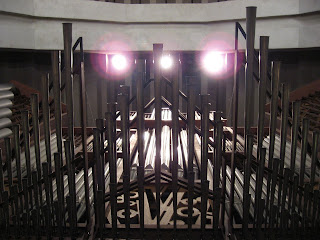 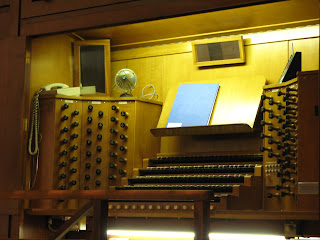 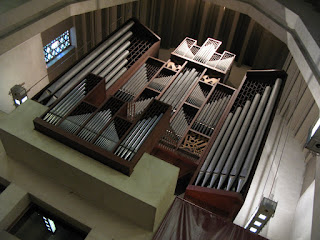 It's a pretty impressive instrument as you can probably tell, it's got 5,811 pipes, most of which are inside the box spread over 117 ranks, or rows if you prefer and the largest pipe is 14 meters (46 ft) tall. They don't make them that big very often, but a big church calls for a big instrument. Anyhow, I was able to watch the entire convocation from up there, get some pretty good pictures and chat with organist while all 399 of the graduates that were not my significant other went up to get their diplomas :o)

After the graduation ceremony, my sweetie headed off to a wine-and-cheese evening with some of his buddies (he rejoined me later on in the evening) while I went out to dinner with some of our friends from work in Chinatown, one of our usual haunts. If you're ever in Montreal and want to give the food in Chinatown a try, I recommend Keung Kee restaurant. They have amazing fried tofu, shrimp cakes and a very interesting and tasty dessert: fried milk! Trust me about the milk, it's worth a try :o) Another great place we go to is the L2 bubble tea lounge. If you've never tried bubble tea, you really should! It's usually made with either green or jasmine tea , either straight up or mixed with milk. They then add a natural fruit flavor to it, I chose mango on Saturday, and they serve the drink to you either hot or cold with either plain or fruit flavored tapioca bubbles in it. Yum! 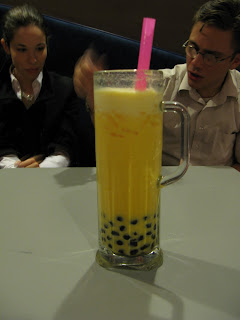 On Sunday after my boyfriend left to meet his brother and then take his train back to Toronto (a year and a half on the nose until that contract of his is up...we're counting down), I headed out to one of Montreal's many outdoor markets, Atwater Market. It's an amazing place with all kinds of fruit and vegetable famrers' stands as you can see from these photos: 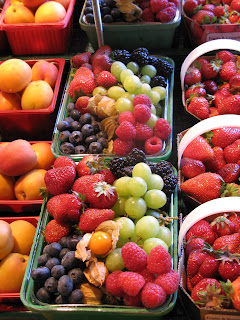 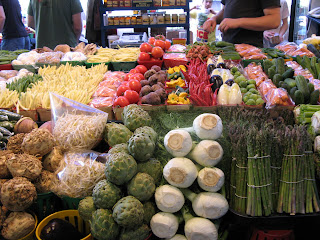 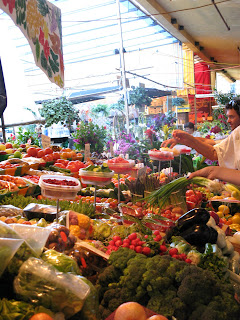 But they also have a huge selection of annual and perennial flowers in the spring and summer, which is why I was there with my mom and one of our friends. Our friend needed some shade plants for her garden and I wanted a flower pot to put outside my apartment door. Here's a shot of the pot I chose as well as one or two others I took of the gardening stands. 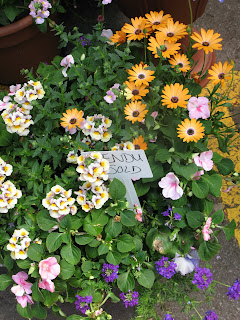 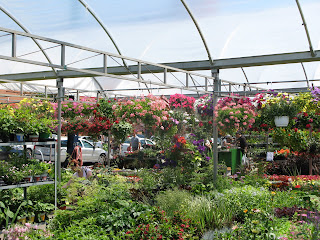 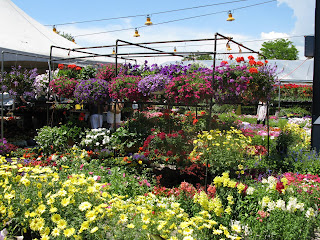 So there you have it! With all of that packed into one weekend, I'm pretty tired out, I actually nearly slept through my alarm this morning! Oh well, I guess I'll just have to try and get to bed a bit early tonight to try and make up for it, but it's a good tired, a very good happy tired. I hope you all had a great weekend too and that you have a great week!
Posted by Karine at 19:42