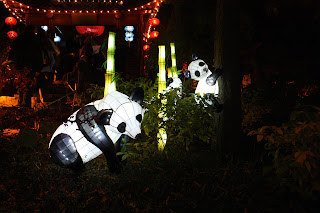 So, I've had quite the busy week! I spent quite a bit of time with my Sweetheart, naturally. He stayed over at my place on Wednesday, then on Friday we went out to the movies since he wanted to see Skyfall, the new James Bond movie. It was my first time ever seeing a James Bond movie and I really liked it. Sweetheart says I now have to see all of them, but luckily for me he only has one on his computer at home. I may have liked Skyfall, but I'm not sure how I feel about an all-out James Bond marathon! I'll be seeing my Sweetheart again later on today since he'll be coming to my choir's concert and then I'm hoping we'll head back to his place together for a nice quiet end of the day and evening!

I was also at the movie yesterday with my friend V. We went out to lunch at Boccacino's and then she proposed that we go and see Twilight: Breaking Dawn part 2. As I've mentioned before, I've always vetoed going to see the Twilight movies in the theaters because I want to avoid the die-hard Twihards, but I figured that since the movie had been out for a week and it was a middle of the afternoon showing, it would be okay to risk it. Luckily it was fine and the movie really was quite good! I'll be buying the DVD when it come out so I can watch it with my Sweetheart. He will of course be satisfied before there is a 'Jacob shirtless' scene. A Twilight movie would not be a Twilight movie if Jacob did not take of his shirt and show off his six pack at least once :oJ

Aside from that things have been pretty quiet. My father is doing well right now. He's signed himself up with a personal trainer in order to help him get some of his strength and muscle tone back, but is taking his time filling out all the forms he needs for his first appointment. He's been getting out more though, which is nice to hear and he might even come to my concert later on today. He's flipped back and forth twice so far on whether he is going to coming or not though, so I'm not putting any money on it and neither is my Grandma G who would really like to come and is counting on my father for a ride. I'll let you know how that turns out, but Grandma G and I are both crossing our fingers!

Well, I had better get a move on since I do have quite a bit to do before leaving for my concert, namely figuring out what to do with my hair!

I hope you're all enjoying your weekend :o)