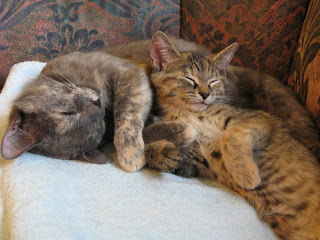 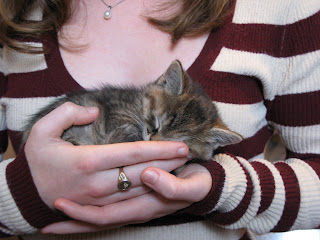 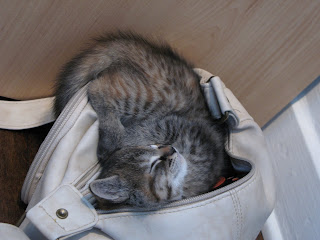 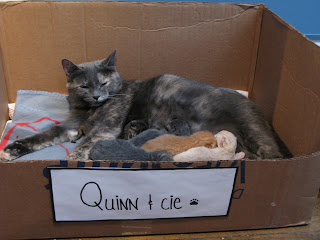 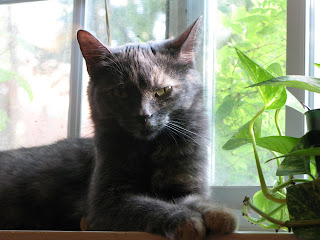 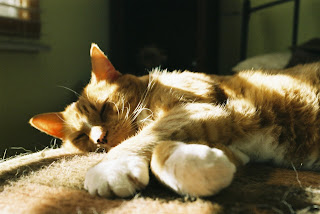 So, for picture's sake this weekend, I'm decided to write about my cats, all three of them. Cinnamon was my first cat who passed away in November 2007. He was my 'dream come true' cat, the one that I was able to finally get at the age of nineteen after having wanted a cat from the time I was able to form coherent thoughts. He was ten when I adopted him and I had spotted him on the website of a cat adoption agency. The uncanniest thing was that his name was Cinnamon, the same name that I had given to a stuffed cat that I was given for my sixth birthday and he was, as you can see, a ginger tabby with white paws, just like my stuffed cat. We were clearly made for each other :o) Anyhow, I spotted him on the site in April of 2003 and was enchanted by him and I felt so sad at the thought that probably no one wanted him because he was older cat. So I kept checking the site day after day and then one day my mother told me that I could have him if I wanted to, so I contacted the woman running the agency and a few days later he was mine. We had a wonderful four years before he fell ill and I had to let him go. I was heartbroken when we had to say goodbye, but I already knew that I wanted another cat when I eventually got my own place, which happened a lot sooner than I expected.

In February of 2008, my oldest friend's younger sister, who was an animal care technician at a West Island vet clinic took in a cat who was expecting kittens that had been found wandering around Île-Bizard. That cat was Quinn, my lovely blue cream toirtoiseshell and she ended up having five kittens, four males and a female. The first time my friend took me to see them I said 'You know I can't take one, my mom doesn't want another cat in the house!' Well, I saw them and I said 'Fine, I'll move out and take two.' lol So I did, within a month I had found an apartment and I moved out on the first weekend on June and took Quinn and her only female kitten with me. I named the kitten Magique and she chose me by falling asleep in my purse and my hands on my third visit to them. She's turned into a real looker, and she and Quinn get along very well and make very good companions for me...even if Magique can be a bit of a brat :oJ

So there you have it! If anyone has any pictures of their pets they'd like to share or stories about them, feel free, I'd love to see and hear them!
Posted by Karine at 18:35