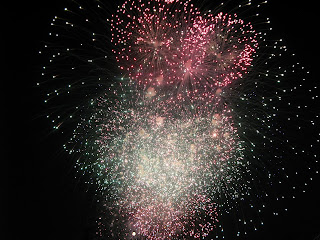 I've been keeping a closer eye than usual on the counter included with my reader origins map lately because I noticed that I was getting close to the 500 mark and when I checked the counter this morning, I saw that I had made it 502!!! I'm so amazed that I've already had so many readers come to visit my blog, I've only had it online since the end of march! I never expected anyone to come and read it aside from my family and close friends, so I just wanted to say thank you so much to all of my faithful readers, I'm very touched that so many of you come to read my blog so regularly :o)

As for the photo to go with this thank you post, it was taken on July 19th last year at Montreal's annual fireworks competition. I try to make it out to see the fireworks at least once every summer, which isn't too difficult since there are one to two competitors a week from mid-June to the end of August. I was in a very festive mood when I took it since I was at the show that night as part of a party I was having with my friends, so I found it perfectly appropriate for today's post as well :o)
Posted by Karine at 22:52