A different kind of jet lag... 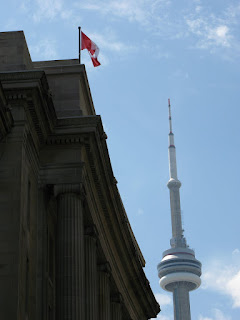 As any of you who have read my profile know, I'm from Montreal and my boyfriend of five years is currently living in Toronto. He's been working on contract there for almost ten months now and has another fourteen to go...unless he asks to have his contract extended for three months so he doesn't have to move in the dead of Winter again like he did last year. He and his brother and a friend actually have to drive a van full of his stuff all the way up the 401 in a snowstorm...not be recommended, apparently.

I love going to visit my boyfriend, naturally. I miss him like crazy, some days more than others and mostly in the evenings when my day is winding down and he's not on Skype so I can't talk to him. On nights like those, I often end up dreaming about him, dreaming that I'm with him and I have dreamed that he was sleeping beside me, have actually felt his arms around me and have woken up bitterly disappointed to find an empty space in the bed beside me or that the heat I was feeling against my chest was being created by one of my cats having crept under my blankets and curled up against me. This is very sweet of them to do, but is a bit of a let down when a few moments earlier that feeling was coming from what I thought to be my significant other's arm around me.

You may be wondering why in Heaven's name I didn't move to Toronto with my Sweetheart. I nearly did, actually. Last year I ended up between two jobs right when he was moving. I applied for a job in Toronto, got an interview right off the bat, headed over there and would have been hired on the spot had I not requested a few days to consider the offer before accepting it. I came home and within twenty four hours wrote to my prospective employer to says that I would accept the job...and then it fell through. It turned out that I would have been employed under the table and at two places at once instead of one and I would have needed a car to get between the two which I could not possibly have afforded on the salary they were offering me. I kept looking and applied for a few more jobs, but didn't get that lucky again and then the Oratory took me back and I've been on a career path there ever since. I couldn't possibly give that up to move to Toronto for two years or what is now a bit over a year and my boyfriend agrees with me. I may as well stay here and wait it out. My boyfriend and I have never lived together either, so it's not like he left with all of our stuff or anything or I was actually really being left behind, in case you were wondering about that :o)

So I'm here and he's over there and I head over to visit him about every month and a half and he heads over here once a month. We are definitely raking in the Via Rail Preference points ;o) Yes, it's a good thing we both love taking the train! What is not so much fun however is how I often feel on my return from a visit to my boyfriend's. I have a very hard time when it comes time to leave, the last time I had to come home I cried pretty much all the way from Brockville to Cornwall before falling asleep...that's about an hour's worth of tears. Then I spend a few days in a kind of haze, the best way I can describe the feeling is that it's something like jet lag and it comes from the fact that I get pulled from a place where I feel safe and at peace and just plain right back into my new kind of normal where I have to get used to not having my boyfriend a simple phone call away, where I can't just get home from work, get changed, feed my cats and then grab stuff for the next day before heading out to spend the night at his place. He isn't just a subway ride away anymore, he's five hundred kilometers away and a visit to him has to be planned around his calendar and my calendar and when we have meetings and who else is going to visit him. Every time I go to see him I have to get used to that all over again and I miss like he's just left all over again and I have to wonder when I'm going to be able to see him again all over again. It is not easy to do and I've considered packing up and moving over there again, but I then gather up my courage and tell myself that we're almost halfway through this so I have handle it for a few more months until we get to the point where we're getting closer to his coming home for good. What will happen at that point, I don't know, but we'll have to wait and see, all we can do is take this one day at a time. 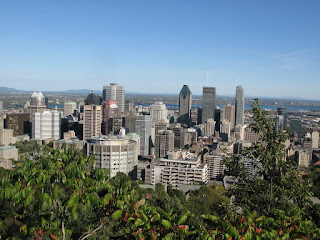