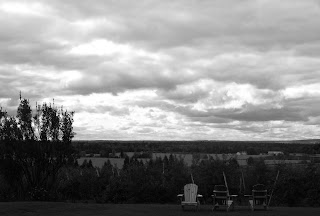 So it's Skywatch Friday time again! This week my feature for you guys is a photo that I took almost exactly one year ago while out apple picking. It was originally a color shot, but with the big billowy grey clouds I found that it had far more potential as a black and white shot, so I transformed it with Corel and here you have it! I was hoping to get more nice fall shot this coming Saturday when my friends and I went apple picking again, but unfortunately the weather is not going cooperate with us and it looks like we're going to get rained out :o( Oh well, maybe we'll go and pick ourselves some pumpkins in a few weeks instead.

On that note, have a great Skywatch Friday by going to check out other Skywatch photos here and have a fun weekend...even if yours turns out to be rainy too!
Posted by Karine at 20:58