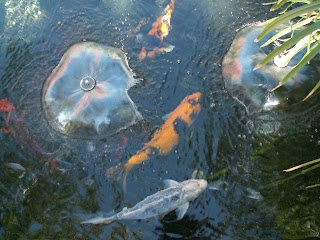 Hi everyone! So, I'm posting at my usual time this week, sorry I was so late last week, a lot of you seem to have missed out on my post because of that...this week's feature is the Koi pond at Miromar Outlet mall in Estero, Florida near where my Grandparents lived up until last week...they've now moved to Aiken, South Carolina because, being from Canada, they just couldn't take the heat down in Southwest Florida anymore after living there for about twelve years! They wanted to move somewhere that actually kind of had four seasons without having to deal with all the snow we get up here. Anyhow, I always really liked to visit the outlet mall when I went down to visit my grandparents because they always had great deals and also because it's such a beautiful place. It's a huge strip mall with beautiful plazas and fountains, one of which is full of Kois that were actually really easy to get pictures of because as soon as they noticed people coming up to the pond, they swam over expecting you to drop bread crumbs or other food in for them :o)

So that's Camera Critters for this week, be sure to head over here to see other camera critters and have a great weekend, Happy Thanksgiving to all my Canadian readers!
Posted by Karine at 12:25