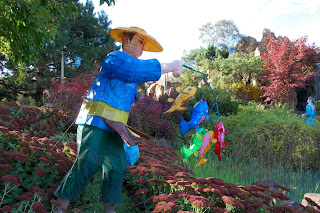 Today I...
...am sharing this photo of a fisherman lantern that was set up on the shore of the lake in the Chinese garden during this year's lantern exhibit at the Botanical Gardens with you.
...went out to lunch with my uncle.
...tried out a peppermint mocha from Starbucks after lunch and loved it! It was decaf, of course. I don't take caffeine of any kind very often as it doesn't entirely agree with me.
...had a meeting shortly after lunch and found seven messages in my voice mail box when I got back. I was definitely right yesterday when I figured that I was going to be spending a lot of time on the phone in the next few weeks.
...went to the fax machine and found that the light for my voice mail box was flashing again, but ignored it. It was 4:20 P.M. and I finish work at 4:30. If I had returned the call, I would have had to stay late for sure and was in no mood for that. In my books, anyone who calls and leaves a message at that time should not expect a call back until the next day.
...had my suspicion that C has a very low pain threshold confirmed today. She came in complaining of a splinter in her foot and tried to get it out herself. Then the security guard came in and tried to get it out, but she was complaining and yelling so much that he gave up and she went back to taking care of it herself and made more of a fuss. I have never heard anyone get so worked up about a splinter in all my life, not even a child! D and I gave a hearty round of applause when she got the splinter out and the security guard was still laughing about the whole thing at lunch.
Posted by Karine at 21:47