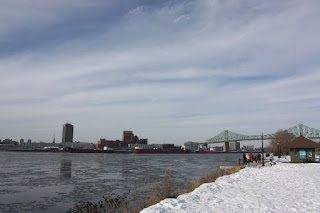 This week's Skywatch feature is a shot I took of Montreal from Île Notre-Dame when I was there for the Fête des Neiges (Montreal's Winter festival) a few years ago. I am hoping to make it out there for this year's edition as I really did have a good time the last time I went. This year they are including a snow village as well, including an ice hotel. Why anyone would want to spend a night in a hotel made out of ice is beyond me, but it has been quite the thing to do at Quebec City's Carnaval for many years, so they decided to open one up here. You won't ever catch me spending the night in either of them, that's for sure! I get cold some nights just sleeping in my own bed, so I cannot imagine how I would survive the night in a hotel made out of ice!

To see more Skywatch photos from around the world, stop by the Skywatch Friday Blog. Thanks for visiting and have a great weekend!
Posted by Karine at 17:36