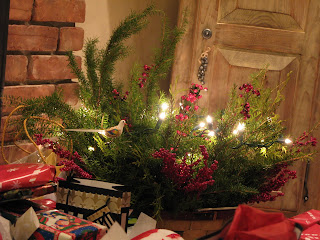 ...am sharing these two pictures of the Christmas arrangement at my aunt and uncle's place from last year with you. The little bird you see belonged to my uncle's father, so it makes an appearance every year. 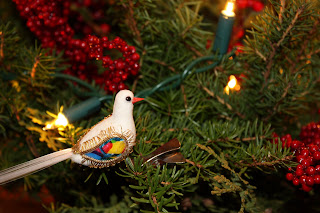 ...could not believe how slow the traffic was on the way to work, right up to the subway station. I would have understood the situation had there been heavier snow and wind, but it was just light snow coming down and no wind, so it was just weird? I think some people have this switch in their brain that says 'OMG SNOW!!!' and it goes off as soon as a flake falls so they can't drive above 20 kms per hour anymore...

...had a pretty full day with a tour and a bunch of data entry to do.

...had a bus driver with what I refer to as 'yo-yo breaking syndrome' on the way home from work. That means that he would break almost completely, then let his foot off the pedal and then break almost completely and let his foot off the pedal and then finally stop completely. I sure was happy to get off of his bus, I'll tell you! It was the first time I had him since moving into my area two and a half years ago, so hopefully it was a one time thing!
Posted by Karine at 20:16