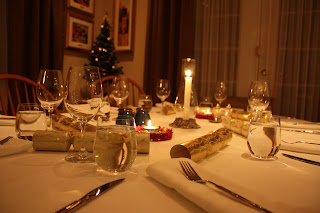 Today I...
...spent the day with my grandparents. We dropped some old things of mine off at a charity thrift shop, went out for lunch, then out to the mall in the West Island where we ran in to some friends of theirs and then off to their airport. We parked by the runway and watched a series of planes take off and then went back to their hotel for a bit before going out to dinner with my uncle, brother and cousin. These photos are not from the restaurant by the way, they are from my aunt and other uncle's place on Christmas Day. 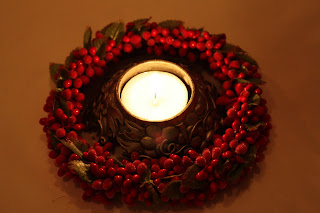 ...Ate a lot. Like, a lot, a lot, a lot. I actually ate a lot during this entire holiday season and now have a fridge FULL of leftovers. I will not need to buy groceries for a while, which is lovely because it will allow me to save some money and make the grocery gift card that my mom gave me for Christmas last a lot longer!!!
...Was disappointed to find out that flannel blankets seem to be a thing of the past. They make flannel sheet sets now, but what I was looking for today was a flannel blanket. My mom got me this lovely cotton thermal blanket for Christmas, you see, because my old flannel blanket which went between my sheet and duvet used to be hers and my fathers which means that it was somewhere around 30 years old and was so worn that it had holes in it and was no longer very warm. I was very happy when I unwrapped the blanket she gave me on Christmas day, it was actually the exact one I wanted, but it turns out that it is too warm for me since I live in an apartment and can't control the heating in my room. If I could, I would keep it cooler than it is and the blanket she gave me would be fine, but since I can't, I have been having very restless nights for the past week because even if I am not too warm when I get in bed, I am before I fall asleep and then have a heck of a time and don't fall asleep for hours, or I do fall asleep but then wake up and am boiling hot, especially once Magique has come to curl up beside me, Hence, my quest for a flannel non-thermal blanket today, which was unsuccessful. Since I was unwilling to spend on an entire set of bedclothes of which I would only have used one piece, I am resigned to either sleeping without a duvet, or removing the thermal blanket and keeping it at the foot of the bed in case I am too cold under just the duvet and a sheet which is probably going to be my final decision as I am most attached to my duvet. Ugh, I wish I hadn't tossed my old flannel blanket before having properly tested my new blanket, but I never expected it to be a problem. Oh well, nothing to be done about it now, I suppose.
...Was sad to say goodbye to my grandparents tonight, I had a wonderful time with them for the past three days and will now not see them again until at least the month of May at my concert. It seems a long way off, but I'm sure it will go by fast.
Posted by Karine at 22:06