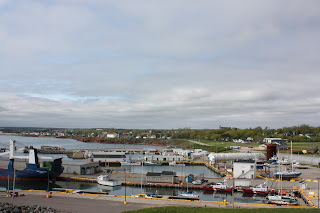 ...am sharing this photos of Souris, Prince Edward Island and its harbor seen from its light house with all of you.

...decided to have a uniform free day and went to work in one of my favorite black t-shirts rather than in my Summer uniform polo.

...had a crazy day at work, which was fine by me because it went by way faster that way!

...just about killed myself laughing after my colleague K and I finished explaining to a tourist that if the critter he had seen in the woods behind Brother André's Chapel really was a skunk, then he really, really didn't want to go back there to try and get a closer look and a picture of it. After showing him pictures of a raccoon and a skunk on my smart phone, he was able to tell us that it was a raccoon he had seen. We were relieved for him and broke into fits of giggles as soon as he was out of earshot.

...went for my jog tonight, but had to resort to walking about three quarters of the way through due to some tendon pain on the inside of my ankle. I was most disgruntled. I'll see how it feels on Sunday, but right now am not planning on jogging again until Monday, just to be safe.

...am so happy it is the weekend, because that means that my Sweetheart is coming home!!! He should be back tomorrow and I simply cannot wait to hear the sound of his voice and to get my arms around him and see how rested he is. Eager is not sufficient to describe how I am feeling :o)