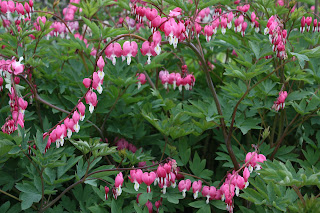 Bleeding Hearts in the gardens at Green Gables, PEI

...had a rather crazy day at work. I think I spent all of an hour at my desk all day.

...spent two and half hours showing two photographers from Tourism Quebec around the Oratory. It was great, they had some awesome equipment and none of them had ever been to the Oratory before, so I was able to tell them lots of stuff they didn't know about it and they gobbled it all up!

...spoke with my Sweetheart for a bit. We'll probably be seeing each other around the end of the week, more likely than not on Friday so we can watch the opening ceremonies of the Olympics together!