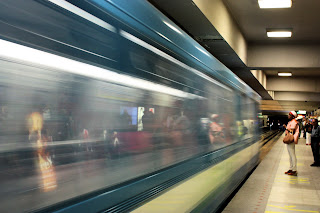 ...went out to vote, we had provincial elections here today.

...was good entertainment for a few European tourists when I had to chase a very gutsy squirrel out of the information booth three times!

...am quite relieved that the Parti Québecois (very annoying political party who do not believe Anglophones have any place in the province of Quebec, do not take kindly to immigrants unless they learn French within five minutes of arriving in the province and would like Quebec to be an independent country and won't drop the issue even though it was voted down in a province-wide referendum twice 15 years apart)  was only elected as a minority. They will more than likely not last very long as they are known for their in-fighting. They'll more than likely end up either self-destructing (again) or being booted out by a non-confidence vote in a year at the most.

...was shocked to find one of my two blue and white female platys dead when I got home from work. All my fish looked perfectly healthy when I left this afternoon, so maybe it was old age?