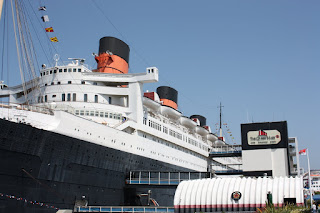 Today I...
...am sharing these photos of the R.M.S. Queen Mary with you. She was pretty much the highlight of my visit to the Los Angeles area. I am a major trans-Atlantic Liner buff and have a particular fascination for the Titanic, so ever since I found out quite some years ago that the Queen Mary was permanently docked in Long Beach, I had been dreaming about visiting her figuring that she was the closest I would ever get to seeing anything near what the Titanic was and she did not disappoint! My Sweetheart and I both felt that she was well worth the 25.95$ we paid to spend nearly three hours exploring her. 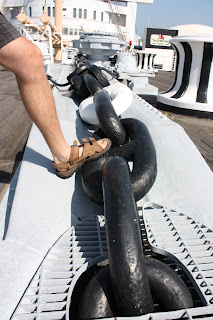 ...That is my Sweetheart's size 9 & a half foot on a link of the Queen Mary's anchor chain. 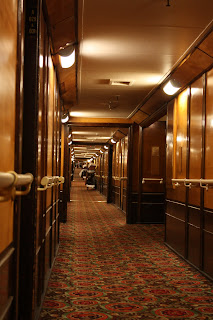 ...and this is one of her first class corridors. The Queen Mary has been out of service and docked in Long Beach since 1967 and now functions as a museum and hotel. You can learn more about the Queen Mary here.
Today I...
...went out to play mini-putt and share a barbecue dinner with four of my friends.
...finished third in the mini-putt standings and had the highest number of holes in one. Unfortunately, when I was down on my luck, I was really down on my luck and three holes in one weren't enough to get me first place. Better luck next time!
...enjoyed having lots of laughs with me friends, I needed it!
...am happy to report that my cold water tap in my bathtub & shower is FINALLY fixed. I just wished the landlord hadn't actually meant it yesterday when he told me that the handyman was going to be here at 7:00 A.M. to fix it, as I literally had to roll out of bed to let him in and tell that I hadn't actually believed the landlord when he'd said 7:00 A.M. I mean seriously, how often does it happen that anyone coming to do work in your home is actually there when they say they're going to be there? Oh well, at least it only took 45 minutes to fix and then I went back to bed and slept for two more hours!
...am looking forward to seeing my Sweetheart tomorrow!
Posted by Karine at 22:02