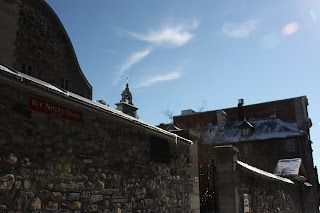 ...am sharing this picture of the beautiful stone wall outside Sulpicien Fathers' residence, which is beside Notre-Dame Basilica in Old Montreal with all of you.

...am disappointed. My evening with my Sweetheart has been put off for the second day in a row. We were supposed to get together yesterday evening, but his afternoon meeting with his two colleagues ran late. Really, really late and he was really, really slow letting me know about it. So slow in fact, that by the time he called me to let me know we wouldn't be able to get together, I was getting ready to call him to make sure he was okay, because I was getting worried about him. It turns out he was kind of not okay too though, because he was coming down with a bad cold. When we hung up last night he was getting ready to go to bed early and we agreed to get together tonight after my appointment at the hairdresser's. We were going to go to the Greek restaurant near my place, but then he sent me an e-mail this afternoon telling me we would have to put out date off because he was too sick. So there you have it, I'm basically all dolled up with my hair nicely blow dried, with nowhere to go. I've just ordered a pizza and will be spending my Friday night with my cats, a pizza and the TV trying not to feel sorry for myself.

...went for my first eye exam in many years and was disgusted by how much it cost me. 290$ for an eye exam and to get my lenses changed. That's right, 290$ is without new frames thrown in there. The salesgirls at the store actually looked at me crooked when I told them that I wanted to keep my frames because I really liked them. It was a 'are you kidding me, these are SO not in style!' look. Exactly the sort of thing you're not supposed to do to a customer. My frames are not ugly, they aren't damaged or broken and most importantly: they are not so trendy that I will look ridiculous with them in a year or two, so why on earth wouldn't I keep them? Also, at the price I'm paying for my lenses, I was expecting to be told that they would be ready sooner than within 10 business days! I, who was told that I should now wear my glasses pretty much all the time, even for ready, am now without glasses, possibly for two weeks! Good thing my eyesight really isn't all that bad and I can manage okay without them, it's just going to be annoying when I watch TV!

...just locked Magique in my bedroom because she was climbing up my clothes rack again. She hadn't done that in ages, but she had been trying to pull it off all afternoon and she managed it twice in a row before I got my hands on her and chased her into my bedroom and closed the door. She must know she's done something wrong, because she's not yelling at me to let her out.

...am hoping for a better day tomorrow. Really, this is two weeks in a row that my weekend has started off on the wrong darn foot, so hopefully I'll catch a break tomorrow!
Posted by Karine at 18:42