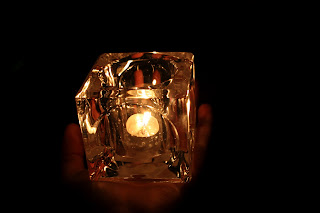 ...am sharing this photo of my Earth Hour candle with all of you. I've been participating in Earth Hour since it first began five years ago in 2007. The idea is that every year on March 31st, you turn out all of your lights between 8:30 and 9:30 P.M. as a show of solidarity between millions of people who want to make a difference in our planet's future. To learn more about Earth Hour, you can visit their website here.

...had a pretty laid back day.

...got my cleaning done.

...went to renew my monthly transit pass and then made a quick stop by the grocery store.

...came home and crashed on the couch for a few hours and watched episode two of the Napoleon miniseries I finally found on DVD two years ago after hunting around for it for a eight years.

...trimmed my cats' claws. That's ten claws in all (I only do their front paws) and I am so very happy that it is so much easier than it used to be. I used to wish for chain mail every time I did it, but it's been about a year now that I have trained them into behaving when I trim their claws, because if they're good they each get two treats afterwards. It usually works :o)
Posted by Karine at 21:30