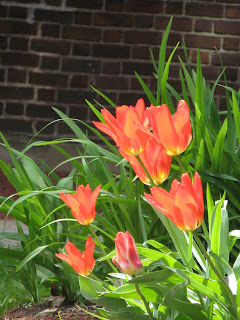 ...watched 'Pleasantville' on TV. I had never seen it and found it to be a good movie, although maybe a bit predictable at times.

...spent the afternoon after the movie was over right up until 7:30 P.M. writing a letter to my Sweetheart. It's a Word document, not an e-mail so I'll see if I send it to him or not. It's full of all sorts of things that I've been wanting us to talk about lately that we haven't been able to because of his work overload. It's not a negative letter by any means, just a some things that I'd like us to be able to work out. We went out on a date last night, something that we haven't done in ages and while I was able to get his mind of of his work and all the stress that it's causing him for short periods of time, it kept coming back. He's trying so hard to balance things and spend time with me, but I still get home right after seeing him and feel like I'm missing him already. I'm worried about him too, I haven't seen him this stressed out since he was trying to finish his Master's thesis while working a 'real' job at the same time. He's paler than I've seen him in a good year and he's lost weight (probably all muscle tone because he hasn't been to the gym since February) and just looks so worried all the time. I don't know what to do, I feel so powerless to help him and at the same time I feel as though I'm adding to his stress by being all needy and insecure. I've come to notice that when someone close to me becomes unbalanced in their work habits for more than a week or two, I start to flip out. My Sweetheart has been working like a demon since January, so that should give you an idea of my state of mind right now. It ain't pretty. When I do see him, I just want to stick to him like Velcro and God bless him, he puts of with it...as long as we're at home. Anyhow, that's another reason why I've been a bit sporadic about my posts recently, I'm trying to deal with my fear that my Sweetheart is going to turn into a clinical workaholic. Logically, I know that's highly unlikely because he is miserable right now and would like nothing better than to be able to stop working. He is not working because he feels it give him any sort of emotional high or because he feels that the status of his job or the social status it brings him are what people love him for, he is working because if he doesn't deliver the goods on time for the building projects he's working on right now, his business is toast. He just ended up with way more on his plate than he ever planned on having. Hopefully he'll be able to clear of his plate soon though, because I can only logic away this illogical fear of mine for so long. Right now he is feeling rather pessimistic and doesn't think all this stuff will clear up until after he gets back from Angola, which is looking like July. I wonder what the expiry date on my stock of logic is?
Posted by Karine at 21:40