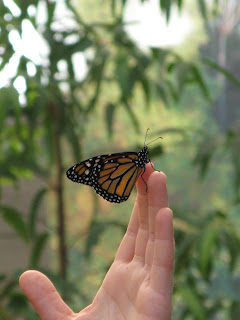 ...am sharing this photo of a butterfly sitting on the finger of a staff member at Montreal's Botanical Gardens.

...am trying to cheer myself up by sharing this photo of a butterfly.

...was in quite a cheerful mood thinking that I would be seeing my Sweetheart tonight and tomorrow, until I spoke with him and found out that we wouldn't be getting together after all. His work has not been going as well as he had hoped and he forgot that the had a meeting out in Laval tomorrow morning for an extension to a dentist's clinic that he and his partners are going to be building. His engineering consulting firm took off with the wind in its sails a few months ago and has since grown at three times the speed he and his partners had expected it to, which in itself is marvelous. The problem is that they are now swamped with work, doing things that they had only planned on doing three years from now when they had already earned money doing smaller projects that would allow them to hire staff to help them get through the bigger projects. They never really went through the small phase though, they just kind of went straight to medium and now they're getting pretty darn close to the big phase...but do not yet have the money to hire another member for their team.

...no longer feel like going to work. I just want to stay home and am feeling kind of mopey, especially since the weather outside is going to match my mood in a bit: they're announcing rain. Insert me sighing here. Guess I'll just have to suck it up and get over it.
Posted by Karine at 11:45