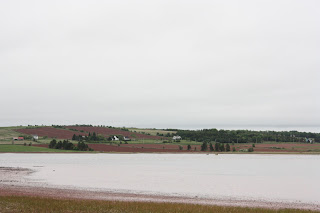 Bay and farmers' fields in Victoria By The Sea, PEI. Click to enlarge and you will see men in boats harvesting oysters.

...woke up early with my Sweetheart and sat with him while he ate his breakfast, then went back to bed when he left.

...didn't really get back to sleep, just dozed until I felt rested enough to get up. I will get the hang of this getting back to sleep after Sweetheart leaves for work, it'll just take a while and by the time I'm used to it, I'll be back on a schedule where I'll have to get up early to go to work too :o)

...made it out for a 2.2km jog after work, I was quite happy to be able to get out there, because between being wiped out on Monday and then rain last night, I hadn't been able to run since Saturday!

...just finished Skyping with Sweetheart, a nice end to my evening. He may be leaving for Haiti on Monday, but is not 100% sure yet. He'd like to go down there, but the timing is not the greatest for him right now because of some work he has to get done here and the folks in Haiti are being pretty last minute with making up their minds about whether they want my Sweetheart and E down there on Monday or not. I hope not. He just got back from vacation two weeks ago and I would really like for him to stay home a bit longer before leaving again. He'll hopefully find out whether he's going or not tomorrow.