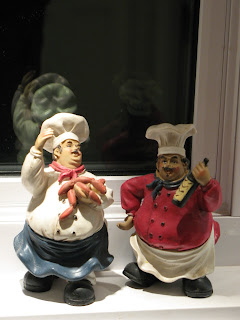 ...am sharing this photo of my aunt and uncle's two little kitchen helpers. Why? Because I am contemplating spending a good bit of time in my kitchen this weekend in order to make a crock pot meal and bake some cookies. Yum...

...had a slightly quieter day at the office today, thank Heavens! I think I would have gone bonkers if the flow of phone calls coming into the office had kept up with that on Monday and Tuesday.

...was submitted to a day of Christmas music C and D were tired of listening to our usual classical music station, so they opted for an American station out of Plattsburgh which is already playing Christmas music all day every day. Ugh...my tactic for tomorrow? Bring in a few of my Christmas music CDs, that way if I must listen to perpetual Christmas music, at least it will be music that I like!!!

...spoke with my Sweetheart for a little bit. He was actually about to call me when I called him, he was wondering what time I was getting into Toronto on Thursday next week because there was a really nice concert on at the TSO, but unfortunately I'm getting in a half hour after the concert starts and I can't change my ticket :o( Oh well, no big deal. He'll just go to the concert the day before with a buddy.
Posted by Karine at 21:16

Email ThisBlogThis!Share to TwitterShare to FacebookShare to Pinterest
Labels: cooking, music, Today I...