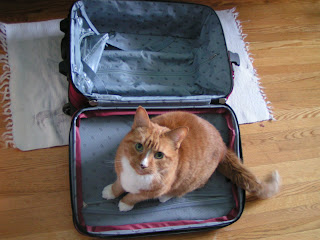 ...am sharing this picture of my first cat Cinnamon with you. I've written about him on here once before in one of my earliest posts, but haven't show him off again. Here he is sitting in my suitcase on the day I left for Italy back in 2006. he would do this every time I took out my suitcase because he realized pretty darn quick what it meant! Didn't he have an amazing 'You know you're taking me with you, right?' face?

...am asking you all to pray for my dear colleague 'L', our director of communications. She had colon cancer several years ago and had been in remission for six years, but had apparently (even though she kept it hidden from most of us, namely C, D, and I) been feeling unwell for about a year. We found out last week that she was diagnosed with liver cancer and found out today that things don't look good at all when she asked our director of personnel to have us say a special mass for her. We're going to have it on Thursday morning at 8:00 A.M., but I would so appreciate if you could all say prayers for her as of now. L is such a kindhearted woman, always smiling and happy, the kind of person who lights up a room when she walks in and has such a passion for her job. We all want so much for her to get well again, so won't you send some prayers and-or positive thoughts her way?

...was happy to be able to sleep in this morning since I was only starting at noon. That's the upside of working afternoon-to-evening shifts. The downside is that it sets my inner clock all out of whack, or at least when I do it as often as I have been lately. My body doesn't know what to expect anymore I think!

...still feel all warm and fuzzy when I remember holding one of my fellow choristers' newborn son last night. It had been years since I had held a baby in my arms and I had forgotten what an amazing feeling it is...especially when they smile at you as two-month old Baby O is just starting to do...nothing turns on the 'Mommy' instincts more than that!
Posted by Karine at 22:16