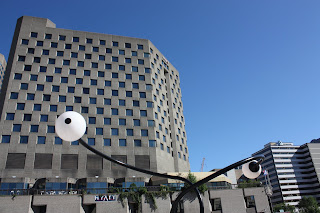 Today I...
...am sharing this picture of the funky exterior light near the Place des Arts in the Quartier des Spectacles here in Montreal. If you think they look like eyes, you're not the only one :o)
...had my second of three tours I've had scheduled since Monday cancelled. Yup, out of three tours, I've only made it out for one! The worst part is that the same on-call tour guide came in for nothing twice to split the groups with me! Poor guy...we're starting to think he's going to think twice before coming in the next time!
...heard what I thought might be the fire alarm go off while I was eating dinner. When I got out into the hall to check things out though, I realized that it wasn't the fire alarm going off, but the alarm bell in the elevator! There was a lady stuck in there between the first and second floors because some guy held the outer door of the (70 year old, but still going strong) elevator and the car stopped thinking that someone was trying to get in even though the car was already moving. She was thankfully not claustrophobic and was therefore not panicking, but was quite pissed off at the guy who got her stuck in there. It didn't take too long to get her out of there since it was not a mechanical break, I'll keep that in mind if ever the same thing happens to me!
Posted by Karine at 20:03