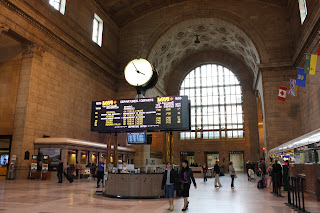 ...am back to blogging after a nice, long weekend off!

...am sharing these two photos I took inside Toronto's Union Station with all of you. As many of my followers, who have been with me for quite a while know, I spent I great deal of time in this station over the two years that my Sweetheart was on contract in Toronto. The first time I went to visit him in Toronto, we actually met right by the arrivals and departure board in these photos. I understandably was never very interested in looking around the station since the most time I spent there was while waiting to get on the train home. Not a very cheery experience and I had to do it a dozen times, so yesterday while I was waiting to get on the train, I actually had to keep reminding myself that I was coming back to Montreal where my Sweetheart is, rather than leaving him behind in Toronto. 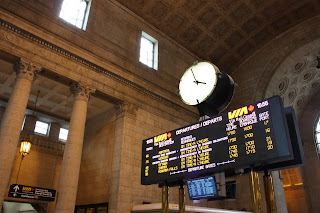 ...am happy to report that I acquired many baby care talents while visiting with my family this weekend and helping care for my cousin's six week old baby. I notably became extremely comfortable handing a wriggly baby, learned how to burp him and most importantly changed my first dirty diaper. I also learned that babies, even at six weeks old, notice everything you do, to the point where I spent a lot of time playing the 'face making' game with him, it was so much fun and so amazing!

...had a relatively quiet day at work.

...received, of all things, a box of Mexican food from a pilgrim who came to visit this summer. I helped him plan his visit to the Oratory and referred him to his tour guide, so he sent both a guide and I a box of canned Mexican food from, according to the Oratory's resident American priest who is from Chicago, the best Mexican food company there. I'm curious to taste it, but I'll have to wait until D can drive me home to get the stuff to my place and taste it since the box is too heavy for me to carry all the way home on the bus. This box of food is by far the most...original take on a tip that I have ever come across.
Posted by Karine at 18:28