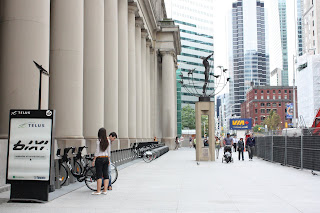 ...am sharing this photo of the Bixi station outside Union Station in Toronto. I was quite happy to see Bixi bikes going around Toronto as it shows how Montreal and Toronto can have impacts on each other. The Bixi bicycle sharing project started out in Montreal two years ago and is based on the bicycle sharing project in Paris. Since starting in Montreal, New York has tried out the project and is planning to launch it within a few months and Boston and Washington are also trying it out. It is a hugely popular program in Montreal and is contributing to our becoming a greener city all the time :o)

...got a ride home from D so I could get my box of Mexican food out of the office. Now I am left with one question: what in the heck am I going to do with five cans of re-fried beans???

...practically drooled while listening to the Montreal Symphony Orchestra's inaugural concert in their new concert hall. It was Beethoven's 9th symphony and I have never heard it sound so good. I do believe that our new Maison de la Symphonie (Symphony House in English), as the new concert hall is called,  rivals Toronto's Four Seasons Center. I can't wait to go and visit it during one of the open house days between tomorrow and Sunday :o)
Posted by Karine at 23:00

Email ThisBlogThis!Share to TwitterShare to FacebookShare to Pinterest
Labels: music, Today I..., Toronto