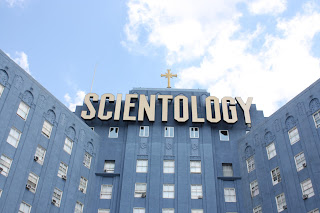 This week's Skywatch feature is a photo that I took of the imposing Church of Scientology building that was just around the corner from my Sweetheart and I's hotel in Hollywood last year looming against the sky. We were actually quite lucky to get these photos as we were accosted by two Scientologists outside the building after being in front of the building for not even five minutes. We talked our way out of having to delete our photos and went on our way. Just seeing the idea of having to be housed in this building (because it is housing for new members) would be enough to keep me from ever considering converting to the religion. It looks like it was probably a psychiatric facility at some point, wouldn't you say?

To see more Skywatch photos from around the world, you can visit the Skywatch Friday blog.

Thanks for stopping by!
Posted by Karine at 18:51