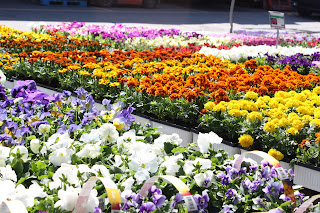 ...am sharing this photo of an array of annual flowers that were for sale at Jean-Talon Market last Saturday, lots of marigolds and pansies!

...am happy to report that yesterday's concert went very well. My choir is now on break until September. I'm going to miss it, but at the same time, it feels nice to be able to have laid back Monday nights!

...went for two half-hour walks, one during my lunch break and then I walked home from work and stopped in at a frozen yogurt parlor just past the halfway point, yum!!!

...am going to try and be in bed with my light out at 10:30 P.M. again. I'm trying to knock myself off of the nasty sleep-cycle I was on for nearly a month. It was actually more like insomnia. I would be exhausted, but wouldn't be able to wind down enough to be in before by Midnight and once in bed it would take me forever to get to sleep. I was pretty much a walking zombie and I'm still not much more than that now. It's something that happens to me this time of year, I'm just too tired and stressed out because of how crazy work gets and my concerts and practices and on top of that there has been some Sweetheart related stress as well since he has been working so much. Anyhow, I'm trying to do better and get to bed way earlier so that even if I don't fall asleep right away I'll at least be asleep earlier than I would be if I only got to bed at Midnight or 12:30 A.M.!

...thought my Sweetheart had left for Quebec City until he popped up on Skype at 8:45 P.M. It turns out he's leaving tomorrow morning at 4:00 A.M. much to his disgust. Why he and E couldn't leave tonight I don't know, but I guess E was working too late or something. They are heading To Quebec for a bridge building conference. Also, the horror of the building project my Sweetheart is working on just north of Montreal continues. The person requesting this building, I swear, makes the Pharaohs of Egypt look like the best bosses in the world, so let's call him M. Pharaoh. He wants construction plans in two weeks even though he doesn't have a building permit from the City yet. Sweetheart and I would love for him to be reported. Sweetheart would love to find some way out of this project. Lesson learned: never work on a friend's building project (M. Pharaoh is a friend of J, Sweetheart and E's business partner). They will think that they can treat you any way they want and that you will follow their schedule no matter what just because they are your friend, or in this case you senior engineer's friend. I wish I could waltz up to M. Pharaoh and give him a piece of my mind. I will refrain from expressing what I would like to say to him here because it includes several words that are not normally included in polite conversation. Since I can't waltz up to M. Pharaoh and tell him to go someplace hot and fiery in a hand-basket though, I'll just pray for a solution to the problem. God will know what is right in this case.
Posted by Karine at 21:32