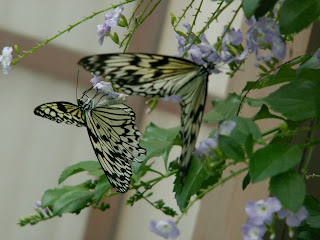 ...am sharing this photo of two butterflies in the greenhouses at the Botanical Gardens with all of you.

...came home from my Sweetheart's rather earlier than I had imagined I would be. He woke up early this morning and left me to sleep in a bit more while he went back to work, which is what he spent the better part of the evening yesterday, except when we went grocery shopping and then had dinner. Poor Sweetheart, he has another deadline for M. Pharaoh's clinic on Monday, so he only stops work to run the odd errand, eat and sleep. We did have a nice little walk Downtown this morning before I came home though, he wanted to pick up his new camera from a store on Peel Street. He had been talking about the camera for, literally, years. He was waiting for the announcement of when it was going to be released while he was living in Toronto and when they finally announced the release date this Spring, he put in a request for one to be held for him as soon as the store received them. He was very happy when the call came in for it and spoke about it a bit last night, but when we went to get it this morning, he was not as excited. I had imagine, all this time, that when he was finally able to get his hands on the new camera, he would want to break it in right away, but he didn't even bring a lens this morning, saying that he had to head back home and get back to work. I felt pretty bad for him :o( Anyhow, suffice it to say that I will definitely be going on vacation on my own!

...was feeling pretty down this morning when I saw that the weather during my vacation might not be too great. :o( Hopefully the forecast will be better in a day or two.

...decided to make chicken with mushroom and Merlot sauce in my crockpot for dinner. I encountered a problem, though, when the blasted rubber cork wouldn't come out of the bottle! I called my brother to ask if he knew of any tricks to open bottles with rubber corks, but he didn't. He suggested that I try pushing the cork into the bottle, but when that failed, he suggested that perhaps I could wrap the bottle in a towel and use a hammer to break its neck, but it didn't seem to have worked...until a huge piece broke off the side! It took me a few moments to realized where the wine was coming from, it had already spilled all over the sink, the counter, the floor, my clothes and my feet! Fortunately, I was able to salvage enough wine to make my chicken, but by the time I had the sauce ready, the kitchen and myself cleaned up and the crackpot started up I knew that it would be ready far too late for me to have for dinner tonight. I ended up having trout and vegetables instead and will have the chicken tomorrow. I will have more than enough for several meals of course, so the rest will go into my freezer and I am planning on having some with my Sweetheart when I get home at the end of next week.

On a final note, this may be my last blog post until I get home from from PEI next Friday. I hope you all have  a lovely week and I will try and get a post up on Friday, otherwise I'll be back on Saturday next week for sure :o)
Posted by Karine at 21:38