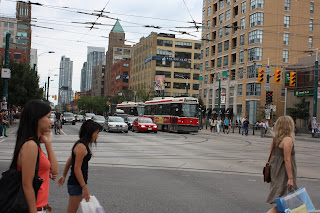 ...am sharing t his picture of a streetcar on Dundas Street in Toronto with you. I took a whole slew of pictures of streetcars at the same time as I took this one, so be prepared to see more :o) I'm a huge streetcar fan and try to ride on them as often as I can when I'm in Toronto, which my Sweetheart helps me achieve since he knows how much I love these delightful vehicles. He never gets tired of seeing me get all excited when they ring their bells, which I find most endearing since some people might actually get sick of being seen with someone who goes 'Ooh, he rang his bell! He rang his bell!' every time two streetcars cross paths. And yes, I really do do that, absolutely shamelessly I might add.

...had an agonizingly slow day at work. Ii took three calls all day and just couldn't wait to be done with work so I could get home for the weekend. I've had a cold all week though so I was tired and cranky and I was actually more stuffed up today than I have been all week, none of which helped the situation.

...went grocery shopping after work and was amazed that, despite my tired and cranky state, I managed not to forget anything!

...spoke with my Sweetheart for the first time since leaving him behind at the train station on Sunday. Only for 15 minutes because he's as wiped out as I am since he has the same cold as me and spent all week at a conference downtown, but I was still so happy to hear the sound of his voice :o)
Posted by Karine at 22:06