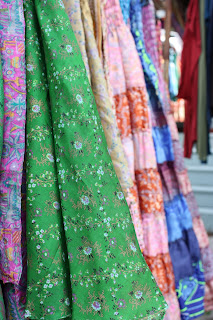 ...am sharing this picture of a rack of multicolored skirts that were on display outside a store in Kensington village in Toronto when I was there a bit over a week ago.

...was feeling kind of down in the mouth for the better part of the day. My friend G, whom I was supposed to go to the fireworks on the South Shore with last night left me high and dry and I therefore wasted my evening waiting for her to call me on top of being left with nothing to do and having too much time to think. I therefore ended up feeling what I've been trying to avoid feeling for a week: feeling lonely for my Sweetheart. It lasted into this morning and part of this afternoon until I gave myself a swift kick in the butt and made it out the door of my apartment.

...went for a long walk walk through Notre-Dame-des-Neiges Cemetery so I could find my four paternal great-grandparents' graves. I didn't even know they were in there until a few weeks ago when my grandma mentioned it to me. It took me hours to find the two graves because the cemetery's 'address' code is pretty messed up. Example: my grandfather's father's tomb is number 06060 in his section, but I finally had to resort to using the shape of the piece of land his plot is on to find him on the map I brought along. His grave (and my great-grandmother's and one of his daughters in law's) is in a section with a marker that said graves number 485-587 were there! Hmm...I think they need to fix their signage!

...spoke to my Sweetheart for over a half-hour. Oh, what bliss! I missed him so much and we're both feeling so much better than we were on Friday, so we were able to have a nice, long chat. I'm going to make sure that I get to talk to him again tomorrow since he's leaving for a conference in Niagara Falls for the week on Tuesday and I don't know if he's going to bring his little laptop with him. I want to stock up on my 'time with him' so I won't end up feeling too lonely for him again.

...have decided that I'm going to have a very noisy housewarming party in two weeks to get back at my very noisy upstairs neighbors. The couple who got into loud arguments every once in a while moved out and a whole bunch of folks about my age (from the sound of them, at least) moved in there. They have their home cinema on late every night and have been having a very loud and animated discussion up there for at least two hours now. If they haven't shut up by the time I go to bed, I'm going to use the old taking a broomstick to the ceiling trick. And yeah, loud party in two weeks, very loud party, but I'll close my windows at 11:30 P.M. so as not to disturb anyone passed that point.
Posted by Karine at 22:25