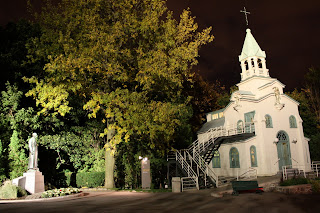 ...am sharing these two shots of the Oratory with you. It was the 106th anniversary of the Oratory's foundation today, so these two are comparison shots. The top photo is one that I took of the original Oratory on Saturday night, although the very first Oratory was actually only the section of the chapel behind the steeple section. It's no wonder that it was that small, really, since the word Oratory means 'small place of prayer'. Brother André built the first Oratory with 200$ he made giving haircuts to the students of Notre Dame College, the boarding school run by the Holy Cross Order where he was porter for 40 years, at the going rate of 5 cents a haircut (the high school is still up and running right across the street from the Oratory and is the most prestigious in the province, although it is no longer a boarding school). The first Oratory is the only part of the sanctuary which was built without donations from the public. As you can see from the photo below, even though the name 'St.Joseph's Oratory' stuck, the Oratory is no longer a small place of prayer by any means. The large church I showed you in the yesterday's post can hold nearly 2000 people whereas the first Oratory was only large enough for a priest and two altar boys! The pilgrims coming to pray at the Oratory had to stay outside. Despite its now rather impressive size, we would have needed two 2000 seat churches this past Sunday instead of one 2000 seat church and one 1000 seat church which is what the Oratory now holds as they both overflowed several times, but we managed anyhow, thanks to the patient and joyful mood of the pilgrims who were more than willing to wait for the next mass when the one the had planned on attending was full. We couldn't thank them enough for making our job easier!!! 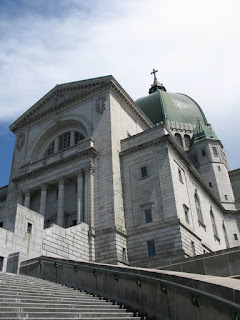 ...had another busy day and am so thankful that I was allowed a 'getting over the Canonization Weekend' day off tomorrow. Hello, rest and relaxation, I will be so happy to see you again :o)

...spoke with my Sweetheart for a half hour, which felt lovely. We had a bit of a snag last night, but we mended it in no time flat and chattered away like nothing had happened afterward.
Posted by Karine at 22:11