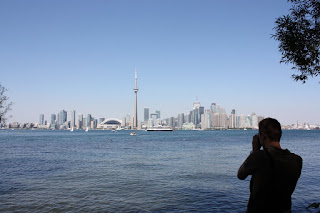 ...am sharing this picture of my Sweetheart taking a picture with you :o) I took it back in August and had nearly forgotten about it until I went to chose a picture for this post. I love taking his picture when he doesn't know it, especially when he is in the process of taking a photo, because he is so focused that he has no clue what I'm up to :o)

...had an unplanned visit from my friend V. We went out to get canned cat food for my cats and then made a stop at the grocery store so I could get a few things there before going out for sushi.

...was planning to watch 'Love Actually' when I got home, but ended up falling asleep and being out like a light for two hours instead! Maybe I'll watch it tonight after CSI NY and Blue Bloods. It'll be a bit late, but I only woke up from my nap at 6:00 P.M. so I have no clue if I'll be able to sleep before late anyhow!

...am so very happy that I'm only working afternoons and evenings this weekend. It'll allow to catch up on my sleep and I'm hoping to not wake up crabby in the mornings next week thanks to that!

...am still wondering how, in the name of all heck, one of my cats (probably Magique because this is so her style...) managed to get my little rubber duck Wilbur (yes, my rubber duck has a name and I am not ashamed to say so :op) stuck in my bathtub drain. He was undoubtedly swatted out of his soap dish and then whacked around in the tub, but how someone managed to shove him into the drain? I have no clue...Fortunately I was able to rescue him and he has moved out of his soap dish and into my hanging bath supply rack which is out of feline reach as it hangs from the shower head! Poor Wilbur, it will take him ages to unruffle his feathers from the ordeal.
Posted by Karine at 20:26