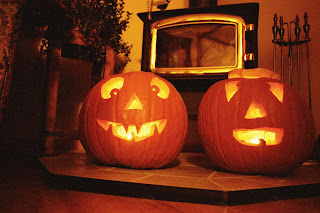 ...am wishing all of you a happy Halloween for tomorrow! These two fine fellows are a pair of pumpkins that my Sweetheart and I carved together way back when in the first year together (meaning 2004). He had never done a thing for Halloween before because his mother didn't believe in it so he had a huge amount of fun coming over to my place and carving a pumpkin and handing out candy with me. Hopefully next year we'll be able to at least carve a pumpkin together and maybe hand out candy. We'll have to see how that works out with his condo, but there's no handing out candy in my apartment building as there are no kids in here!

...had a relatively quiet time of it at work. It was mostly staff management a helping out at the coat check for the Holy Cross Order's celebratory dinner at the Oratory after the mass at the stadium.

...took the impressive amount of snow falling on my way out of work in stride. Yup, you read that right, snow. What can I say, it's late October in Montreal, snow happens at this time of year here. Not every year, but it does.

...took the salt truck that drove by while I was waiting for my bus in stride as well.

...am looking forward to my life being less crazy once the last day of celebrations for Brother André's canonization is over tomorrow and I actually have a normal work schedule again. Well, kind of, my boss wants me to go in from noon to 8:00 P.M. on Tuesday because it's the mass for the dead (November 2nd, it's a tradition every year) and there may be a lot of people. *sigh* okay, at least I get to sleep in again on Tuesday morning!
Posted by Karine at 11:29