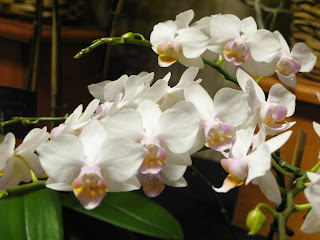 ...am sharing another orchid photo with you. I usually go to the orchid show where I took these photos every year in October, but this year with Brother André's canonization, there was no way I could make it.

...am feeling better. I had a tour to give and so was freed from my 'best friend' the office phone for half of the day. The tour and everything that went with it plus lunch meant that I only had to take calls for a half hour on either side.

...was so very relieved when C told me that she wouldn't be coming in tomorrow. She wasn't sniffling as much, but started coughing up her lungs (that's really what it sounds like when she coughs) again. She should have rested up sooner as we have all been telling her to. Oh well, hopefully the day off will do her some good and she'll be okay for the weekend.

...spoke with my Sweetheart for a bit. Vancouver went well, but was incredibly rainy, he said he had never seen such crazy amounts of rain. We didn't get to talk much because he needed to unpack his bag from Vancouver and re-pack for his trip to Montreal. We won't be seeing each other this weekend it looks like. It's not unexpected since his family pounced on him and it's his niece's second birthday and I'm working afternoons and evenings all weekend but I'm still a bit disappointed. Darn me and my emotions, they're always so much worse when I'm tired.

...noticed, just before writing up this post that I'm missing one of the little diamonds on a diamond and amethyst ring that my father got me for my 25th birthday. I actually bought it myself with a gift card he gave me for the mall and I was charmed by it when I saw it in the window of one of the small jewelry stores. I had problems from it almost from the start with a loose center stone (the amethyst) that actually fell out once. I brought it back to the shop and after wrangling with them over the validity of the guarantee, they reset the ring. Then back in August the ring fell onto the floor of my washroom and the stone fell out again so this time I gave it to grandmother who brought it to her jeweler friend and he reset it for me again and added some prongs to it to make sure the stone would stay in place...and now this diamond is gone. For Heaven's sake!!! All I can say is never buy from Doucet Jewelers if you're jewelry shopping in Montreal!!! Stick to Kauffman and Sons (my grandma's jeweler friend works for them), Le Parchemin or Birks, you'll pay more but will get good quality stuff!!!
Posted by Karine at 21:12