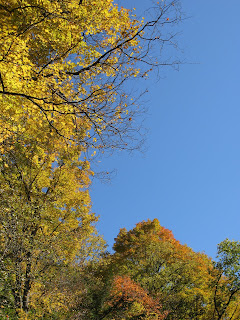 ...am sharing this picture of the fall colors in a North York park while I went there for a walk with my Sweetheart almost a year ago. I'm heading back there next week (actually, if the train runs on time next week, I'll be pulling into Union Station exactly at this time!!!) and will try my best to get a comparison shot :o)

...am very glad it's Friday because work keeps getting busier and busier so Fridays keep feeling better and better!

...was so happy when the rain stopped and the sun came out. We got 70 mm of rain in 24 hours and some areas of the Province got even more making many rivers overflow and flooding basements and roads. I wrote to my Sweetheart this afternoon though and told him that despite Mother Nature's best efforts, she had not succeeded in drowning the whole of Montreal and we had not been set adrift in the St.Lawrence river! I just really hope I don't see another raindrop for a while!
Posted by Karine at 21:39

Email ThisBlogThis!Share to TwitterShare to FacebookShare to Pinterest
Labels: Today I..., Toronto, weather