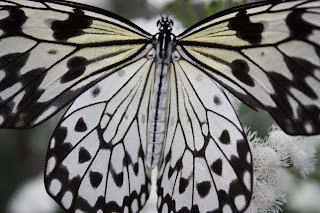 Today I...
...am sharing this photo of a butterfly from the Botanical Gardens here in Montreal. It was part of last year's Butterflies go Free exhibit in the greenhouses.
...had one heck of a long day!
...D went off with our boss to go furniture shopping of all things and left me alone with all my work for the novena, a tour guide who was there to greet buses of pilgrims for the first time and had all sorts of questions and three phones. I told him when he got back that he was not to abandon me like that again until the novena was done.
...could not believe it when I realized that I had been sending e-mails back and forth for a choir who I thought was performing at the Oratory tomorrow with the wrong date and the tour organizer did not call me out on it. When I moved back in the e-mail exchange to confirm the number of singers in the group for D, I realized that they were performing on Tuesday. Good Lord, what a mess. Because this year's novena is a special one due to Brother André's recent canonization, we have a different theme every one of the nine days with a different preacher and sometimes different religious communities doing the hymns during mass. I was scared stiff that I would have to write to the tour operator and tell her that because of the mistake the choir would not be able to perform during mass after all. Luckily for me though, when I spoke to the father in charge of liturgical services, he told me that Tuesday was actually a better day for the choir to perform than Saturday. Word cannot express the relief I felt at that point, I was saved from the biggest mistake I would have ever made. I am in charge of visiting choirs at the Oratory and I will take them in at any time of year, but never, ever again during the novena. It is just the bit of extra work that I do not need at this time of year. But seriously? What kind of a tour operator doesn't notice when someone handling one of their groups has them doing something on the wrong date??? Not once but consistently over a two month period??? When I spoke with the woman this afternoon she was like 'Oh, I gave you the wrong date?' and I was like 'No, I gave you the wrong date like two months ago and you didn't notice and I've been giving it to you since then and you didn't notice!' and she was like 'Oh...so I gave you the wrong date when?' God help me, I don't know how she's still in business...
...was thrilled to go to the salon for a bit of pampering today. I got a bit of a new hairdo and felt much more relaxed when I left the salon than when I got there.
...am so happy it's the weekend. It's going to be a bit of a busy one, but I'll be glad to not be doing seating plans and such!
Posted by Karine at 22:11