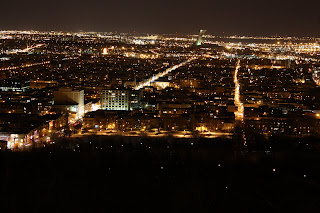 Today I...
...am sharing some of my Earth Hour pictures with you, since I made it out with some friends last night. I got some from two sides of Mount Royal, this top one and the one of the raccoons below are from the East side observation area, you can see Montreal's (in)famous Olympic Stadium. They had just lit it back up at the end of Earth Hour. If you click on the picture to enlarge it though, you'll see that quite a few of the apartments and condos still have their lights out. 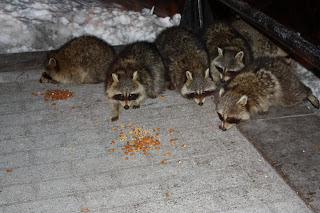 These next two pictures are taken from an observation point in Westmount, facing south towards the St.Lawrence river, Downtown are and part of the South Shore. 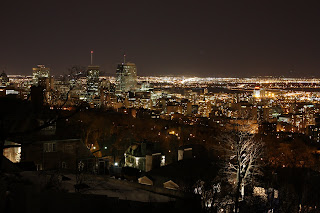 Once again, if you click on the pictures to enlarge them, you will be able to see just how many people turned out their lights to participate in Earth Hour...especially since there was a Canadiens' game last night, which some people thought might decrease the participation level. I don't know why, since you don't need the lights on to watch TV, but it certainly doesn't seem to have done too much harm. 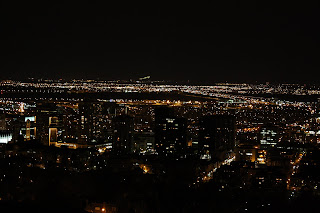 Today I...
...slept ten hours straight, from 11:00 P.M. last night to 9:15 A.M.. It sure felt good!
...went out to lunch with my brother and my mom for my mom's birthday.
...went to visit my grandparents at their new apartment with my brother after lunch. We spent about two hours there. Their apartment is quite nice, very bright and has some great views!
...was disappointed to find out from my Sweetheart that our trip to Honolulu is in jeopardy again due to deteriorating conditions in Japan and worries on his part that Dubai might not grant him a visa as two people that he knows of were either refused or very grudgingly given visas and he doesn't want to flush 250$ down the toilet for a visa if he may not even get it. Once again, we are considering a change in destination, notably Los Angeles or maybe London. London would cost me pretty much my entire tax return though as I would have to buy more points to go there
(20 000 more to be exact). If we stick to LA, I would have points left over after so we could go to Prince Edward Island at a later date, so for now it's looking like LA? I'll keep you posted.
Posted by Karine at 21:48

Email ThisBlogThis!Share to TwitterShare to FacebookShare to Pinterest
Labels: montreal, Today I..., vacation