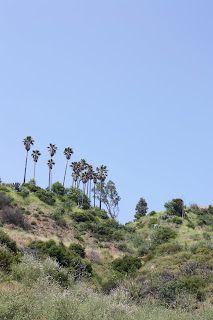 Today I...
...am sharing this photo of the hills in Griffith Park in Los Angeles with you.
...was very impressed when I woke up this morning with the blankets still on me after sleeping right through the night thanks to the weather gradually cooling off. Phew! I was able to leave all the windows open this morning to air out my apartment and get rid of the humidity, hooray!
...had a nice long chat with my Sweetheart and it felt wonderful. We planned on getting tomorrow, but then he called back and told me that he had been summoned to a get together for his brother's wedding anniversary. He hadn't even know that it was his brother's anniversary tomorrow, it had completely slipped his mind. Oh well, we're going to get together on Friday instead and then he is going off camping for the weekend with some of his old friends from when he lived in France on exchange before we met back in 2004.
Posted by Karine at 20:56