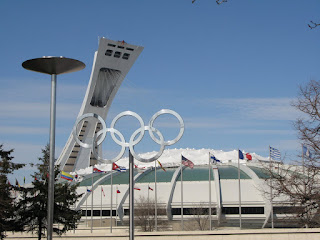 Since the Olympics are opening in Vancouver next week, I figured I would go for an Olympic themed Skywatch this week. I took this shot in early spring last year after going to the Botanical Gardens next door. The stadium is a Montreal staple, just like Old Montreal and St-Joseph's Oratory. Montreal just wouldn't be Montreal without it!!! Even though the running joke in the city in the to call it 'The Big Owe' instead of the 'Big O'. Yes, the damn thing cost us a fortune to build for the 1976 Olympics (we just finished paying it off) and it has probably cost us even more to maintain. Oh well, at least it's well used! It now houses a public sports complex and we use the track and field area for exhibits, some concerts and large sports events and every two years when either the summer or winter Olympics are on, they light up the flame in the cauldron you can see beside the rings.

Have a great weekend and be sure to go and check out more Skywatch photos here
Posted by Karine at 08:03