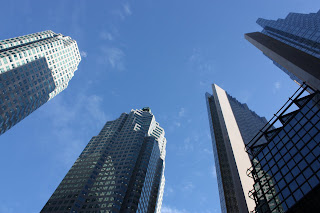 ...am sharing another photo from my trip to Toronto with you, this one is from the business district near Union Station, I just loved the way the sky scrapers were reaching up against the bright blue sky. It's nice to see blue sky like this because we've had so little of it here in the past few weeks and we won't be seeing any until at least Monday from what the weather forecasters are saying.

...got back on the Pilates wagon and it felt great. I hadn't worked out since the Monday I got to my Sweetheart's place two weeks and I was starting to feel lousy about it, so work out I did. I'll try and do it once or twice a week again because I was getting very good results before and I'd like to maintain what I've obtained so far :o)
Posted by Karine at 21:07

Email ThisBlogThis!Share to TwitterShare to FacebookShare to Pinterest
Labels: Today I..., Toronto, vacation