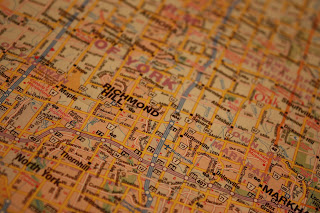 ...am sharing with you a photo I took of the map that my Sweetheart and I used for our road trip a bit over a week ago. We brought our cameras on our drive, but it wasn't sunny out and the lighting wasn't very good for photos, so I took a few pictures of the map we used instead, showing the areas we drove through. This one shows North York, which was our departure point and Markham which is where we really started heading North. From Markham we headed to Uxbridge, had a bit of a drive through there and then we headed up to Lake Simcoe, which is shown on some of my other photos.

...was late to work. Again. I felt like total loser. I left a bit earlier, made it on the first bus that came along, although the fella who got on before me had to pull me out of the way of the doors as they closed to keep me from falling back out. I thought I had it made, that I was going to be on time, but no. It was someones bright idea to have contract workers for the city putting lamp posts in along Queen Mary Road, right in front of the Oratory in the dead of winter, in a snowstorm at the height of rush hour. They therefore had a small crane set up in the right hand lane in front of the Oratory and had it blocked off for about five feet. The traffic was backed up all the way to the subway station and I was late to work. Five minutes late instead of ten, but still late. I give up. I'm going to check out the price of used cars as a last resort, because tomorrow I'm going to have to get up at 7:00 instead of 7:15 since the transit corporation seems unable to provide its users with reliable service despite constantly hiking their rates and the fates seem determined to make me late to work no matter how fast I go in the morning and how much I have to cut into my leisurely pace in life in order to make it to work on time. If, but getting up at 7:00 to leave at 8:00 to make it to work for 8:30 which SHOULD only take me 20 minutes but as lately been taking me 30-35 minutes I still cannot make it on time, I will seriously have to consider buying a car, something that I cannot yet afford and do not really want, because seriously, living this close to work feeling like I might need one is a scandal. But what can I say? Inefficient public services will not cost me a job that I worked my ass off for eight years to get.
Posted by Karine at 20:37

Email ThisBlogThis!Share to TwitterShare to FacebookShare to Pinterest
Labels: bus, Today I..., vacation