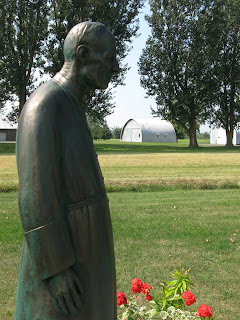 ...am sharing with you a photo that I took of the bronze statue of the Oratory's founder, Brother André, that stands on the of where the house he was born used to stand. It faces a monument made out of the foundations stones of the house, which burned down in the 1950s. Stay tuned to the news tomorrow for some big news about our humble little Brother.

...got the official letter congratulating me on getting my permanent job. It's now stuck to my fridge door with a magnet and won't be coming down any time soon :o)

...got myself a slightly early birthday and self-congratulatory present: a lovely orchid for my office. Yes, it was slightly pricey, but I figure that after all the stress I went through these past few months, I deserved it. Also, my other office orchid was looking kind of sad and lonely since it stopped flowering, so I figure that with two, hopefully one of them will always be flowering.

...got a slightly early birthday present from my co-workers: an awesome six CD set from EMI classics call 100 Best Sacred Music. Drool...I've listened to three of the CDs so far and I LOVE them!

...was happy that my landlord responded to my distress call and finally came to finish fixing my bathroom door. He fixed it so it stays closed now and my can no longer open the door, but he still has a bit of work left to do on that and then he'll have to fix the leaky pipe under my sink. He's going to come back on Saturday, until then I have a Tupperware container collecting the water from the pipe.
Posted by Karine at 22:40